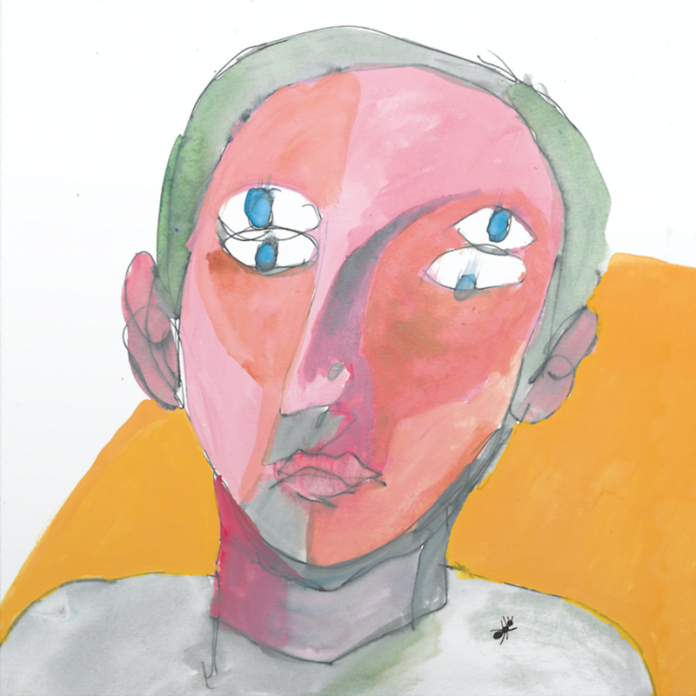 Another New Thing are a trio consisting of Pennsylvania novelist and musician Don Himlin, Preston–based synth wizard Paul Nagle, and Dean Honer of The All Seeing I, Moonlandingz and a number of other bands. In 2015 the guys met on a Sonic Weekend in Wales. Himlin said to Nagle “One day we should make some music together. During Lockdown 2020, Nagle sends Himlin some of his extended modular synthesizer workouts. Himlin writes songs over them and also adds guitar and bass. Nagle said to Himlin “We should send these to Honer to do some mixes and production” The tunes were passed from person to person via transatlantic telegraph cable to add to or subtract from, until lockdown was eased, and they were deemed complete. Himlin casually dubbed the project “Another New Thing,” “because that’s what it is!”. The resulting record, Nagle dubbed “XYZZY” after a magic password key he had discovered playing text-based adventure games on his computer in the seventies, the unknown pronunciation being a bonus in his mind.

The album opens with `A Message` with the sound of twittering birds before vocals bring the song to life or awakens it. There`s an interesting repetitive rhythmic drumbeat, deep vocals, all sorts of things colliding with backing vocals, a recurrent drum pulse, synth and a stap line of

“though it may be upside down and inside out and full of doubt but it’s on the way” “sending a message” shared frequently throughout. Another word “pheromones” is also repeated for some reason. Odd but wonderfully infectious. There`s an uplifting higher pitched electronic beat to `The Action Membrane` with it`s repetitive, almost dual vocals that are slightly distorted or delivered lazily. A guitar riff slices through constantly as a pounding drumbeat leads us through this excursion.

`Do Not Fail` is a slightly unsettling offering with some brash guitar riffs, rolling electronic beat and gruff throaty vocals constantly encouraging us to “Don`t Fail!” a troubling warning shared in a method that would remind you of 1984`s Big Brother`s dystopian dictates. I felt that `Don’t Follow Your Shadow` had a mesmerising, swirling veering towards anthemic texture about it. It was the most immediately accessible number that seemed to have something positive to share. A superbly expansive structure that reminded me of Moby at his best.

`Movie Music` has vocals shared through a vocoder. A delightfully spacious composition with a continual bass line, that is so simple in its implementation but so effective. Midway through it turns a little avant-garde with bashed drums, screaming guitar riffs and some marvellous brass possibly a clarinet. Then as if it couldn`t get any stranger there`s an almost jungle drum beat of sorts that returns to end with a clarinet timbre and more quietly shared vocoder vocals before fading out. I thought `The Ever Never Mind` had a feeling of familiarity. It again has a voice codec effect with backing vocals. The continuous beat throughout makes it an enticing listen that deviates off with an instrumental section towards the end which is quite wistful.

`Hammers And Anvils` has a much harder electronic edge with a pounding beat. The lyrics take a spoken word format which complements the driving thumping, electro-industrial vibe. It certainly does feel that there`s a hammer hitting an anvil in the last passage of the song. To me there was an almost oriental flavour to `Edge Of The Hollow` despite its floating, rolling bongo or kambala sounding percussion. Distant vocal intonations and occasional guitar chord riffs add to the overall hypnotic ambience of the piece.

`No One Cares What You’re Thinking’ Bout` has some husky, hoarse vocals floated over a captivating electronic dance beat. A real seductive anaesthetising foot tapper. An unnerving but bewitching arrangement follows with `Memory Alarm` where the vocal delivery of possibly “Data, Datum, Compression, Straighten” is harmonically chanted as if it was a mantra. I thought there was a fault midway through, but it was possibly a marker to distinguish the former from the latter part which continued at a pace where the background vocals seem to take over.

The album closes with `Home` which has some charming electronic textures with a pleading, imploring vocal aligned to the ongoing electronic beat.

This release was a sheer delight. It was like starting on a journey that had many twists and turns along the way, so much so that you were almost disappointed at reaching your intended destination. It was well thought out and executed. The sort of submission that allowed the listener to read whatever they wanted into it or just enjoy the music. Whether this was by design or accident who cares.

To me “XYZZY” was the magic password key that led to an overwhelming sense of pleasure.