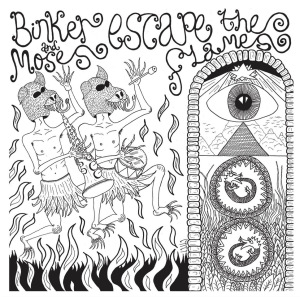 There is a unique musical chemistry between tenor saxophonist Binker Golding and drummer Moses Boyd that is difficult to categorise yet obvious to the ear.  Recorded live in 2017 from London’s Total Refreshment Centre this six track release showcases the first half of their Journey to the Mountain of Forever album released in the same year as this live recording.  A simple re-running of the album however would not be in-keeping for such free spirited talents as Binker and Moses such that the opening track “The Departure”, a friendly 7 minutes on record becomes a seventeen minute rolling epic in the live environment.  The essence and structure of the track remains the same but the audio scenery is much wider and more complex then one might imagine.  The same is true for the whole album.

Binker and Moses soak up all the differing musical styles that surround them.  From the urban urgency of grime to the social immediacy of hip-hop they managed to infuse these moods into their own free jazz visions.  No to performances are the same.  If you want a straight ahead live version of the record you won’t find it here.  You will find much more.  If the opener could go on for an hour it would and no-one in attendance would complain.  Why would you?  This is two musicians at the possible height of their powers both individually and collectively and what a sound they make.  What an atmosphere they create.

Each track has the vibe and a sound that is almost unique to the creators.  Free form jazz is a bastian of creativity and pure emotion and this is exemplified in the seductive “Fete By The River” which may turn out, in time, to be a new jazz standard by which others may be judged.  Golding goes wherever the feeling takes him and occasionally that comes to a complete stop before going again at a quicker pace before settling back down to the familiar rhythm and then off he goes again.  Impossible to predict what is happening and where this music is going.

Moses can often be the one to set the tempo and behind his evocative beats lies a true leader from the back.  Golding’s virtuoso’s playing is seemingly shaped by the intensity that Moses lays down before him.  At time it sounds like Moses is in a world of his own yet somehow still connected to Golding via some musical telepathy that mortals will never understand.

They close with the short “Leaving The Now Behind”, a gentle paced serenade to what has gone before.  Far more simpler in its style and composition but no less powerful for it.

This album demands repeated listens to get the real benefit of the musicianship and creative genius that lies within.  That said if you only hear it once it will be time very well spent.

Escape The Flames is out now.