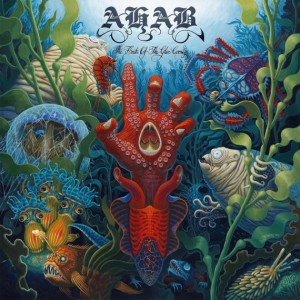 From the opening strains of “The Isle” it’s clear that Maximum Volume is getting themselves into some very deep water and unlike the affable rocker Rod Stewart…….we ain’t sailing!!  We are very much sinking to the bottom of a very large sea and playing us out are Ahab.

There be some very unpleasant things lurking below the surface and these German nautic purveyours of doom appear to be well aquainted with them all.  Taking their name from the Moby Dick character Captain Ahab, a monomaniacal peg-legged sea farer who has an issue with whales, well one inparticular, the band have forged their own distinctive darkened sound.

Of course, those familiar with the Moby Dick novel will be aware of the sorry fate that befell the Captain and whilst the tale provides inspiration for the band you sense that their fate is set on a somewhat different course.  In the 11 years since the bands formation they have progressively challenged the often-staid doom metal scene and The Boats of the Glen Carrig is no exception.

The album sways and rocks with the waves.  On some occasions it is beautifully melancholic and almost serene as the oceans’ calmness, although an undercurrent of menace pervades and something wicked this way comes is never out of reach.

“The Thing That Made Search” is an example of the epic nature that the band have developed over the years. The “lost at sea” landscape is vividly illustrated through a series of passages, once delicate then deathly brutal then back and forth, all through the 11 minutes on offer.

Whereas “The Thing….” draws you in with a slow row to shore, the following track, “Red Foam (The Great Storm”) is straight out of the docks and flows at a rate of knots which the boat is barely able to withstand.  It’s crashing riffs and intense drive make it a standout track on an album full of deep sea treasures.

Likewise “The Weedmen” and it’s near 15 minute length feels like a horror-filled but character-forming journey into the watery abyss.  What doesn’t kill you makes you stronger.  What eventually kills the album is the fifth and final track “To Mourn Job”.  Initially a slow and thoughtful passing turns into a raging blood and thunder firestorm through multiple textured layers of sorrow, pain and moods.

If the band’s previous studio effort, 2012’s The Giant, was considered a standard bearer, and rightly it was,  then this album has pushed them up to the crow’s nest from which they now look down upon the genre’s sprawling crew.

Ahab are heading for new horizons and The Boats of the Glen Carrig may well be the vehicles to transport them there.