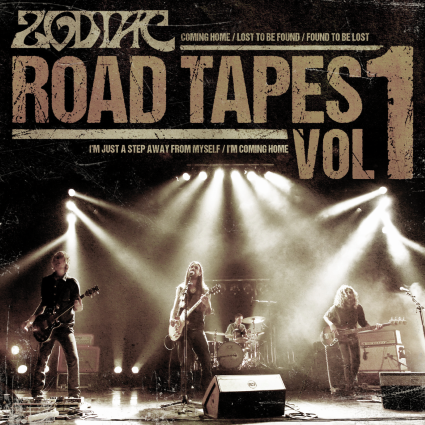 Just before the end of “Free” the second song on this collection, Zodiac singer/guitarist Nick Van Delft exclaims, seemingly out of nowhere, and seemingly for no reason other than he wants to: “rock and roll!”

In those three words Van Delft, (perhaps unwittingly, who knows?) has encapsulated everything that is wonderful about Zodiac. Retro is the new modern apparently, and bands like The Temperance Movement, Scorpion Child, Monster Truck and (this might be heresy but) the vastly overrated Rival Sons are doing very nicely out of sounding like bands from three and four decades.

But anyone who heard “A Hiding Place” and “Sonic Child” – the second and third albums from these German’s that emerged a couple over the last couple of years – know that there is another band to add to that list. Few bands do this stuff with as much genuine love and abandon as Zodiac, and few bands channel Free, Bad Company and Thin Lizzy quite as well.

On this, their first live album, they prove all of that and more. Even listening to the record without the visceral excitement of seeing the show, there is still a a certain frisson and a real sense of what a great band Zodiac are. “Swinging On The Run” takes everything Rival Sons do and teaches them how to sound, it swaggers with a braggadocio that can’t be faked.

Best of all the 10 songs here is the jam of “Rock Bottom Blues” which begins with swirls of organ and takes it own sweet time to plod wherever it wants to go. It’s hypnotic, mesmerising and rather brilliant.

“Diamond Shoes” is the best bar room boogie this side of The Georgia Satellites and shows a different side to the band, while “A Penny And A Dead Horse” proves that Zodiac could be the best swamp blues band around if they wanted to be.

There’s a cover of Neil Young’s “Cortez The Killer” and, rather than being daunted by taking on such an iconic track, rather these boys take the opportunity to put their own stamp on it, like you always knew they would.

The live album is maligned, and often seen as a stop gap between albums. Not “Road Tapes Volume 1” it is not only a superb document of a superb band, it also – rather like the very best of the genre such as Lizzy’s classic “Live And Dangerous” – adds to their canon most agreeably.