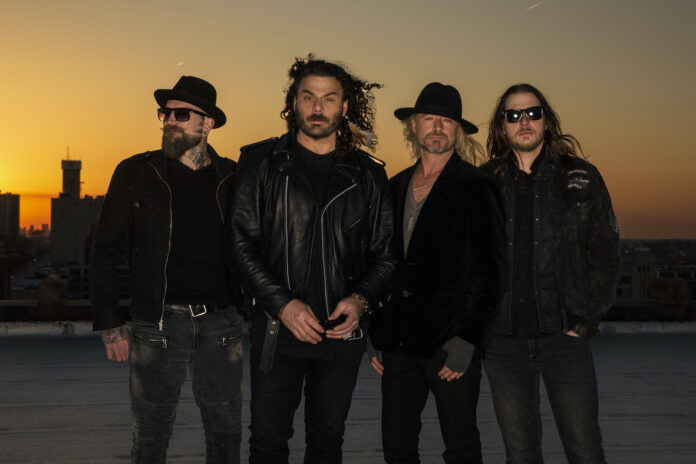 Shaman’s Harvest and Mascot Records / Mascot Label Group have released the band’s new studio album REBELATOR. The lead single “Voices” continues to make moves up the US Active Rock radio chart approaching the Top 20 most played songs at the format. Streams for the song exceed one million plays, while the cumulative count for the four tracks revealed in front of the release exceed four million plays. To hear “Voices,” click here.

This is the Missouri rockers first album in five years and have previously revealed videos for “Under Your Skin”, “Bird Dog” as well as “Voices

“This was the hardest record we’ve ever made, on every level,” says singer Nathan Hunt, referring to Shaman’s Harvest’s seventh LP. The Missouri hard-rockers assembled this project during a global pandemic that debilitated the entire music industry. The road to Rebelator was even rockier than the band expected: natural disasters, logistical nightmares, and an extreme case of collective writer’s block. “We struggled the whole way,” Hunt adds with a gruff baritone chuckle. “It was an interesting process for sure.”

Every creative step seemed to be hampered by an outside distraction—or even act of God. “A tornado ripped through our town, two miles from our studio, levelling everything in its path” recalls guitarist Josh Hamler.  “Luckily, no one was killed.  Everything can be rebuilt, but we completely lost our creative vibe following the tragic event”.  Hunt adds, “There was so much stop and go. There was a flood. We’d have something scheduled, so we’d focus, and be locked down for like a month at a time. Then somebody would have to go home, and it would be three weeks later before we’d start up again.”  Hamler adds with a laugh. “It was like Murphy’s law at one point—like, Jesus, what else is going to go wrong in the making of this record?”

Shaman’s Harvest were working with any musical seeds they could plant—like Hamler’s droning guitar on “Bird Dog,” which sprouted into a desert wasteland atmosphere of mouth harp, group percussion and deep, growling vocals. Hunt calls the final result a “weird mixture of things,” blending its dust-blown textures with bits of Metallica and Queens of the Stone Age—the perfect backdrop for his almost post-apocalyptic lyrics. The song, alongside “Red Hand Black Deeds,” will be prominently heard in the upcoming feature film The Last Victim starring Ron Perlman and Ali Larter planned for release this Spring.

“It’s definitely a cinematic thing—if nothing else, it’s a color or just one little scene in my head,” he says. “In my head, I was envisioning a lot of these small towns, like a railroad town or a farm town where people don’t want to farm anymore. And it just goes to shit, and then you have the opioids come in and everyone becomes a zombie.”

When they arrived at lead single “Voices,” a graceful balance of light and shade, the band instantly knew they’d written one of their best—a feeling cemented by their mutual celebration. “Once we had it all laid out and had a rough demo,” says Hamler, “we listened back to the first time, and we all looked at each other and busted out laughing, like, ‘Fuck yeah!'”

In March 2021, Hunt had to make a life-changing decision whether to amputate his leg or not.

Whilst working in construction a decade ago, Hunt excavated an army base site when the edge gave way. He crashed 20ft to the bottom, crushing his ankle. Years of surgery followed, slowly, the leg below the knee was rebuilt. “I’d get healed up only to realise the problem was worse off,” he remembers. Eventually, a hospital bed was brought into his home, and he filled his days writing.

As time went on, he pushed on and the band became prolific on the road, nightly, they prowled stages on their relentless touring; Nickelback, Cheap Trick, Seether, Black Stone Cherry and In This Moment. They shared the biggest stages with AC/DC, Alice In Chains, Killswitch Engage, Stone Sour, Godsmack, Shinedown, Rob Zombie, Ghost and more. They smashed through each set, and every night, Hunt pushed through the pain barrier. “The fellas in the band cover the stage movement, the jumping and all the high energy, while I’m able to really internalise and project from a place of emotion,” he explains.

Rebelator was finished, but Hunt’s pieced-together leg continued to deteriorate. He started the search for a doctor who would amputate so he at least would be able to walk with a prosthetic. “I wasn’t apprehensive about the decision or anything. I was hopeful. A world without the same pain all the time seemed unreal but possible,” he says.

In May 2021, as they released their first new song in three years, “Bird Dog,” he found hope and a doctor who replaced the joint and rebuilt the Achilles. Today he says,” I’m still recovering and probably will over the next year or so, but I’m already better off than I was before the procedure. It’s giving me a newfound focus on the things that are important to me. Like slaying crowds, and being present and active for my new daughter. I feel like I’ve been given the tools to have a higher quality in life.”

The band has released six albums prior, with a combined 250 million plus streams their repertoire.  The majority of those are in the U.S., with 200 million plays. Europe accounts for 45 million, with other continents amassing the additional 5 million. To date, Shaman’s Harvest has sold over 100,000 albums and 415,000 singles.  At radio, the band’s last album yielded two Top 30 Active Rock singles in “The Come Up” and “Devil In Our Wake.” The prior album, and first with Mascot Label Group, Smokin’ Hearts and Broken Guns enjoyed massive success at the format with four Top 40 Active Rock singles, the highest chart position being #11 with “In Chains.”

They have toured with a who’s who in Rock, amongst whom are Godsmack, Nickelback, AC/DC, Alice In Chains, Shinedown, Seether, and Cheap Trick alongside others. They’ve been a consistent draw at festivals that include Rock On The Range, Rocklahoma, Carolina Rebellion, Rock USA, Rockin’ The Rivers, Rock Carnival, and on the Shiprocked cruise.