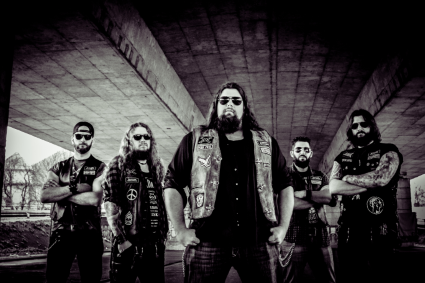 Ultra-heavy guitar riffs, blaring grooves, martial vocals: the world of Blessed Hellride has no room for weakness or half-hearted compromises. Quite the opposite: the five-piece from Trier on the banks of the Moselle shoot their adrenalin-laden heavy rock from the hip with a passion that leaves nothing to be desired and a professionalism and stylistic direction which bring to mind renowned international role models. Mind you, Blessed Hellride take one iron rule very seriously: influences are always welcome, emulating other artists is an absolute taboo. So when guitaristsJack Stoned and The (one and only) Oos play their axes with a force that’s inspired by Black Label Society a.k.a. Zakk Wylde, when frontmanTiny Fuel broadcasts his lyrics with almost physically tangible conviction, when the rhythm section consisting of bassist El Fritto and skinsman Captain Hellride set the pace without mercy, individual style and independence have top priority at all times. As a result, it comes as no surprise that an excellent reputation precedes Blessed Hellride even before the release of their debut album Bastards & Outlaws. Rock Hard magazine praises their “whiskey- and beer-soaked heavy rock with a grooving disposition”, attesting the musicians a “powerful production, haunting songs and cool vocals.”

And indeed, Bastards & Outlaws sees Blessed Hellride celebrate the majority of their songs with amazing power and impressive momentum. The breathtaking opener ´Helldorado`, also the first single and video to be released from the album, sets the musical parameters. Certainly no less driving: the next number ´Moonshine Saloon`, the stoically marching ´Overdrive  Junkies` and the title track ´Bastards & Outlaws`, all of them real heavy rock powerhouses featuring all the qualities that set Blessed Hellride apart from the competition. Yet they do not restrict themselves to pedal-to-the-metal numbers but also excel in conveying atmospheric nuances: ´Dead Man´s Blues` and the final album track ´Back From Hell` are two haunting ballads which add even more colour to the album and show that southern rock by the likes of Lynyrd Skynyrd and Texas Hippie Coalition also counts among the band members’ formative influences.

As diverse as the group’s songs are their lyrics, combining the five musicians’ sense of humour and attitude towards life. The onomatopoeic images contained in some of the songs reflect on the lightness of being, the fun of serious partying and a Route 66 feel, while others tell specific stories. ´Blood Red River`, for example, is – in line with its title – about the not entirely legal disposal of a disagreeable wife in a – subsequently blood red – river. ´Papa Joe` has a father with an affinity for alcohol embark on a search for his daughter, whom he suspects to be in one of the local taverns. And while dad pays for the booze which he has – naturally – quaffed during his “targeted search operation” by entertaining the other guests on his Dobro guitar, his daughter has long returned home. The song ´Gevatter Tod` (Godfather Death), based on the same-named fairy tale by the Brothers Grimm, also deserves a mention.

Bastards & Outlaws was produced at the Ear We Go Studios in Belgium by sound engineer François Dediste, who has succeeded in transporting Blessed Hellride’s amazing energy and spirit that live audiences find so irresistible to the more intimate studio atmosphere. The result, which the musicians themselves refer to as an “old-school kick in the teeth – without compromises“, will impress rock fans and metalheads alike. So there’s every sign of a storm brewing, with Bastards & Outlaws a sonic heavyweight and lots of live shows lined up which will see the musicians take no prisoners. 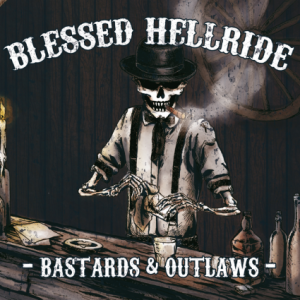