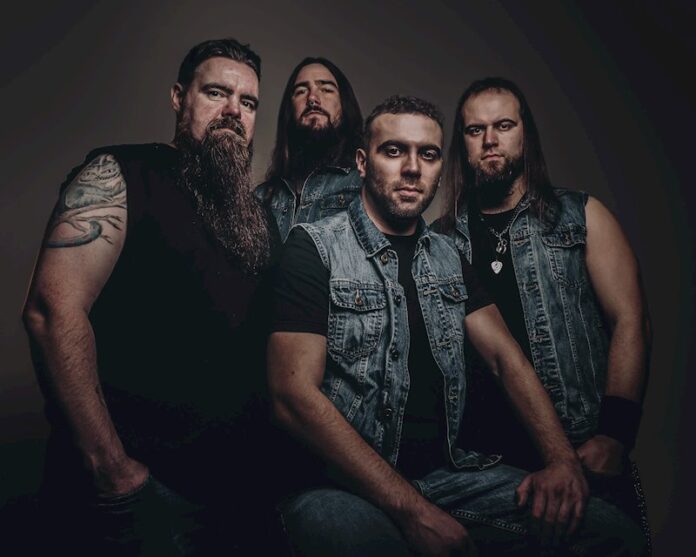 Absolva get serious with their forthcoming album release ‘Fire in the Sky’ due out on Rocksector Records on 18th February 2022. Songs such as ‘Addiction’ deals with alcohol and drug problems, whilst ‘Historic Year’ is about the all too familiar effects of the global pandemic.

The first music video, the title track, can be viewed now at this link https://www.youtube.com/watch?v=i5Binj_d7jk

Frontman Christopher Appleton expands… “Absolva is usually known for the positive themes in our lyrics, yet this time we’ve been drawn toward some darker issues. The pandemic was a rough ride for most people and I personally found it difficult to take, with a mix of effects on my life. Like so many people we suffered the pain of losing a very good friend to the virus and then more generally the negative effects on our music industry as a whole were obviously really bad.”

Nevertheless, the bulldog spirit prevails, not least with the positive energy of album closer ‘Refuse to Die’. Christopher continues… “In the end most of us have things to fall back on and Refuse to Die remembers frantic Friday nights in my hometown Manchester and the wildness of gigs played straight from our hearts. We always strive to savour that energy in our music and performances.”

Certainly, there was much evidence of that energy in Absolva’s live performances in the UK during the latter part of 2021, as special guests with Blaze Bayley (Iron Maiden singer 1994-1999). Absolva also double up as Blaze’s backing band.

Guitarist Luke Appleton adds… “I don’t have words to describe just how good it was to actually get out on tour. The tour was not without mis-hap – both our manager and Blaze himself caught the virus part-way through, and we had a crash in the band van on the final weekend of the tour, yet ultimately across the tour we were grateful to only have to cancel one show due to Covid-19. The bulldog spirit shines through!”

‘Fire in the Sky’ bears all the hallmarks of classic British metal that Absolva are known for, plus an even greater level of intensity. Recorded at Rocksector HQ (Manchester, England) during 2021, production is handled by Christopher Appleton building on his experience co-producing Blaze Bayley’s successful ‘War Within Me’ album in 2021, and the album is mastered by Ade Emsley (London, England) who has worked with a host of bands, not least Iron Maiden. The familiar team is completed with a striking cover image, renewing the band’s collaboration with the talented Akirant Illustration (Spain).

Official release date for the album on CD and digital platforms is 18th February 2022. The vinyl version is expected July/August 2022, subject to global pressing delays. All bundles are available to pre-order now. More details at www.absolva.com

Track listing…
1 Demon Tormentor
2 Burn Inside
3 Addiction
4 What Does God Know?
5 Stand Your Ground
6 Fire In the Sky
7 Man For All Seasons
8 Gall?glaigh
9 Historic Year
10 Refuse to Die

In terms of live shows the band plays in the UK at Hammerfest (Birmingham) on 12th February, Pentre Fest (N.Wales) on 26th February, plus Rockin’ The Bowl festival (Sheffield) on 11th September. In Europe festival appearances are booked for Metal Magic (Denmark) on 7th July and Mannried Open Air (Switzerland) on 12th August. Around 40 club shows are also booked for Europe across March-May 2022 which are under review with promoters and venues, depending on travel and health restrictions.