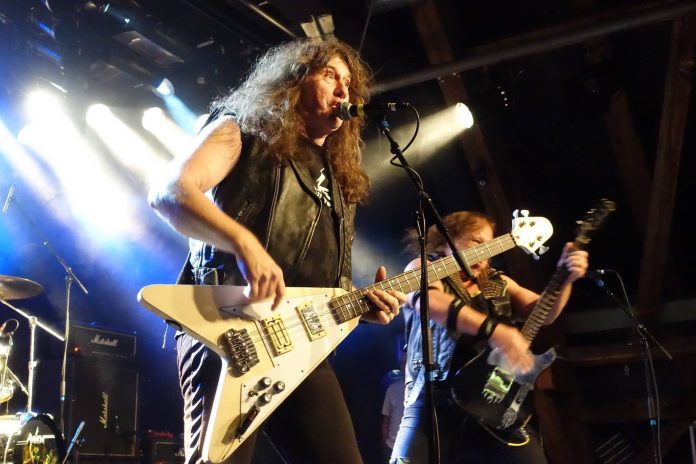 Hostile singer AJ Mills strikes a hopeful note as his band begins their usual medley of “Painkiller” and “Breaking The Law”. “Who knows this song?!” he screams. To be fair the two that raise their hands makes up at that point a third of the audience. It’s a shame because as they proved during their appearance this Spring at the Metal Crusade, Hostile are in possession of just about everything they need to do very well. Their brand of Groove Metal has matured into something to be reckoned with and with a new album in the works they have much to look forward to in 2016. And anyway, nights like this will build character, they say. “Thanks to all of you,” says Mills. It wouldn’t take him long to do it in person.

After an inordinate delay of an hour there’s a few more people in when Heavy Metal’s own Gallagher brothers hit the stage. John and Mark, however, unlike Liam and Noel aren’t overrated and aren’t in a band that hasn’t written a decent song since 1997. In fact, quite the opposite. Raven are a band that never really got the type of recognition they deserved. They proved that earlier this year with the brilliant “ExtermiNation” record, from which the opening tune tonight, “Destroy All Monsters”, comes. They have a back catalogue that deserves more than a smattering of punters in a bar above a Recording Studio in a scruffy arsed part of town.

That’s a debate for another time though, as immediately it’s clear that whatever the onset of time might have done to their hairlines and waistlines, and whatever the current trends might be, Raven do things in two ways: Heavy and Metal. “Hard Ride” is a denim and leather clad slice of double entendre. Everyone knows it and nobody cares. They are all too busy headbanging to care.

“Live At The Inferno” sees the brothers – literally – duel with their axes, and it’s Priest-isms hit home. “All For One” is a fists in the air freak out and in truth that’s an epithet that could be applied to pretty much everything here.

It’s all screeching heavy metal fun and if that’s not enough for you then to be honest, Raven couldn’t give a toss. “Rock Until You Drop” – very much their anthem – is augmented with a solo and “Mind Over Metal” sounds like a British take on Anvil.

Arguably best of all is the slamming “Into The Jaws Of Death” which adds a tight groove to things, another newbie “It’s Not What You Got” brings a certain dirtiness and “Tank Treads (The Blood Runs Red)” chugs. The band don’t really need another trick to their book.

“Faster Than The Speed Of Light” doesn’t provide one either, it just ties up the loose ends, before “On And On” is delivered with something approaching glee.

And then, bless their leather studded socks, they encore as John Gallagher plays a bass solo, on the great scale of pointless things to do its right up there, but rock n roll never needed to have a point, did it? And with that there’s one last tumult. “Break The Chain” is 32 years old but, played as a medley and including snippets of ACDC and The Who here, has the energy of a week old puppy. It’s a fine way to end things.

An Autumn Tuesday. A sparse crowd and a show delivered with passion from one of metals truest survivors. This could have been dreadful but Raven continue to endure by being extremely good at what they do. And for that they deserve all our horns up in the air.