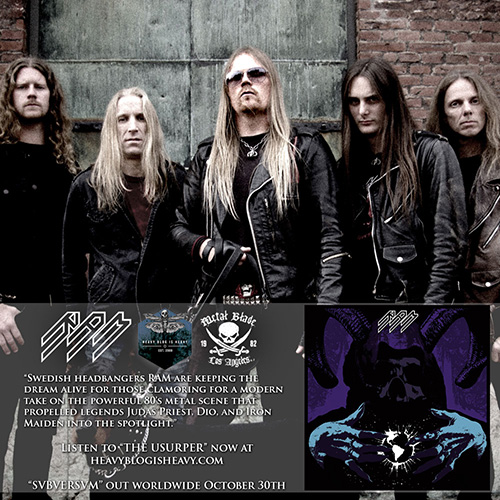 Swedish heavy metal defenders (of the faith), RAM, are ready to unleash their latest batch of fist-pumping, molten metal anthems to the masses in the form of Svbversvm. Go head-to-head with “The Usurper,” courtesy of Heavy Blog Is Heavy, HERE.

Brimming with raging hymns of death, post-apocalyptic dominance and total devastation through iron, the band’s fourth studio offering produced by the band at Black Path Studios, mixed at Welfare Sounds by Olle Björk, Per Stälberg, and RAM, mastered by Daniel Johansson and will be unleashed on October 30th via Metal Blade Records worldwide. In Europe, the record will come available as a limited CD/DVD digipak, as well as on CD and vinyl.

Comments RAM on their latest offering, “This album is the rebirth of RAM and a natural step to take after Death. For this album, we went back and rediscovered the mass of notes, lyrical ideas and sketches that were created at the very birth of RAM, from around 1999-2001. We saw that these ideas were more valid than ever and still very inspiring. We are very pleased with the album that is the product of four months of being locked up in the studio and offering our very last drop of sweat and blood for it to become the most massive RAM production ever. This is our latest assault upon the rotting world, may it be a dagger in the heart of the powers that may be! Svbversvm is at hand!”

As a precursor to its release, today Heavy Blog Is Heavy hurls forth the fire ‘n’ brimstone enormity of “The Usurper” issuing of the track, “Swedish headbangers RAM are keeping the dream alive for those clamoring for a modern take on the powerful 80s metal scene that propelled legends Judas Priest, Dio, and Iron Maiden into the spotlight.”

You can still listen to first single, “Eyes Of The Night” at metalblade.com/ram where you can also find various preorder bundles.