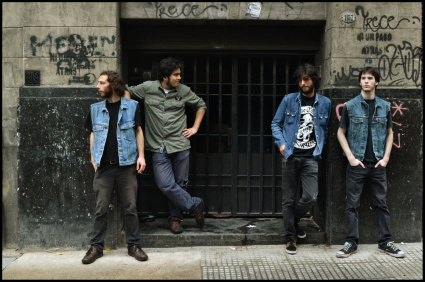 Classic rock from Argentina that doesn’t want to be complex

With their impressive debut album Hard Rock´n`Roll (2013), sweating from every pore the shimmering heat of South American megacities and stylistically influenced by legends such as AC/DC, Rose Tattoo, Led Zeppelin, ZZ Top or Creedence Clearwater Revival, 42 Decibel caused a sensation for the first time two years ago. Their dry-as-a bone sound, the straightforward direction of the songs with blues-rock roots shining through, frontman Junior Figueroa’s rasping voice reminiscent of Bon Scott, and his backyard- and pub-credible lyrics – all this makes the band a compelling natural spectacle that demands a resilient vegetative nervous system on the part of the listener. For 42 Decibel know only one religion: traditional rock´n`roll guaranteed to make even the hardest men’s muscles turn to jelly mash! Now on their second album Rolling In Townthe band from Argentina makes no secret of the fact that nothing but audiophilic wholefood is going to be served here. Rolling In Town will be released by Steamhammer/SPV as CD, vinyl and download at the end of September 2015.

“Our music doesn’t attempt to raise any particularly complex issues, it’s based pure and simple on a conscious vintage aesthetic, a traditional sound and the essence of classic rock and blues,” explains drummer and founding member Nicko Cambiasso. Alongside these rock music foundations, the band’s astonishing development is unmistakable onRolling In Town. Even more so than the material on their debut offering, the new album has a distinct musical identity of its own. “This time we were responsible for everything ourselves, not only the songwriting, but also the recording, production and mixing. This made the recording atmosphere a lot more comfortable and relaxed for the band, getting the best out of us,” Cambiasso explains the remarkable independence on Rolling In Town.

42 Decibel have recorded ten seriously hot new rock tracks, many of them as first-takes with the laid-back character of a jam session, as the concluding tracks ´Cold Steel Rider` and ´Smooth Talker` in particular demonstrate. Cambiasso: “´Cold Steel Rider` started off as a jam in the studio and then turned into the song we’d been working on but didn’t complete in pre-production. It was completed that day in the studio, on the spot. It´s a complete first-take with lyrics that talk about a character inspired by westerns. ´Smooth Talker` was an instrumental improvisation done there at the studio, and then Junior added some lyrics to it. We ended up liking the jam and decided the song was a good addition to the tracklist.” 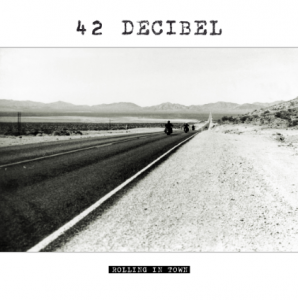 The remaining eight songs on the album take a considerably clearer, more unambiguous direction: ´Rude And Fast` with its fast and violent theme is a mix of classic rock and punk, while in ´Burnin` Down the Road` the slide guitar is more prominent than usual. The supporting riff by Figueroa helps to give it a nice southern vibe. ´Midnight Teaser (Evil Woman)` is the lead single and first video of the album. Cambiasso describes the track as “good lyrics with a nice build-up, great verse, catchy chorus and an atypical and bluesy ending.” Perhaps the song most typical of 42 Decibel on Rolling In Town is ´Down The Hatch´. A catchy chorus, crowd backing vocals, with a great appreciation for drinking and having a good time. Cambiasso: “It is a reflection of songs from the first album.”

With Rolling In Town 42 Decibel resolutely follow the course they set out on in early 2010 with their first 7-track demo and went straight on to put into serial production with their debut Hard Rock´n`Roll. The current line-up with Junior Figueroa, Nicko Cambiasso, rhythm/slide guitarist Billy Bob Riley and new member Matt Fraga (bass), who joined the band in June 2014, is literally bursting with energy and thirst for action, and – with the exception of the final mastering of the album – for which they once more enlisted the services of Patricio Claypole at the ´El Attic Studio`, took on the entire spectrum of tasks involved in a dynamic studio production themselves. You can feel this, not just subconsciously; you can hear it in every note. Ergo: what caused an international stir the first time around in June 2013 is about to strike once again!