With former guitarist Slash the latest to throw his Top Hat into the ring, we pose the question nobody else seems to be asking. 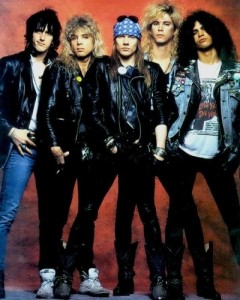 The band formed in 1985 in Los Angeles, California the classic, although not original, line-up consisted of Axl, guitarists Slash and Izzy Stradlin, drummer Steven Adler and bassist Duff McKagan and following their signing with Geffen Records in 1986 they recorded two albums, the genre-defining debut Appetite For Destruction (1987) and the follow-up G N’ R Lies (1988).

Two albums, Use Your Illusion 1 & 2, were released in 1991 to much fanfare, selling over 35 million copies between them. 1994 saw the release of a covers album entitled The Spaghetti Incident which was the last recorded output until 2008 when the Guns N’ Roses banner, featuring only Axl as the last original member, released the long-awaited, and often maligned Chinese Democracy.

Once known as the ‘most dangerous band in the world’ they now still sellout arenas around the world, despite Axl’s legendary tardiness and lack of respect for his fans, with the frontman roping in friends various and refusing to even discuss the possibility of a reunion with his old bandmates. Relations have been non-existent, aside from unpleasant commentaries back and forth, between Axl and Slash since the mid-1990’s whilst Axl has appeared to continue/reignite friendships with the other former band members.

It feels like the rumours of a reunion have begun since the moment Slash & Duff left the band over 20 years ago. I for one am certainly sick of hearing about it. However, it does beg the question whether a band like GNR should reform at all.

Slash’s latest comments about being open to the idea of at least thinking about it has sent the social media rumour radar in a spin with “experts” now predicting it will happen sooner rather than later. This is a significant advancement on the years of back-biting and long moody silences, yes I’m talking to you Mr Rose. That said clearly a reunion of GNR cannot happen without the will of Axl. All other parties seem to be at least willing to consider the possibility but Axl’s imfamous hermit-like media persona means that until he confirms officially one way or another the rumours will continue to be there.

No doubt the biggest factor in a reformation will be the money. Reports suggested that ridiculous sums of money, a few hundred million pounds, were being offered to Robert Plant, Jimmy Page and John Paul Jones to tour once again under the Led Zeppelin banner following their one-off Ahmet Ertegun tribute show in 2007, with Jason Bonham filling in for his late father. Although Guns N Roses are not quite at the Led Zeppelin reunion level in terms of appeal it is no doubt something that the millions of owners of Appetite… would love to see again, particularly if they missed out seeing the line-up first time around.

Overall I can’t help but feel that if an Appetite reunion were to happen then it would be solely for the cash and somehow that doesn’t sit right for a band like Guns N’ Roses. Yes it would be great to see and hear Axl’s vocals next to Slash’s guitar once again but it’s not the end of the world if it doesn’t happen.

If it did happen however, how good would they actually be? While one could be confident about the live skills of messrs Slash, McKagan, Stradlin and even Steven Adler after his much publicised issues, Axl Rose is a different matter. Take away his “turn up and play whenever I like” attitude the reviews of his current GNR and decidedly mixed. He no longer cuts the svelt figure, but then who does, of 20 years ago and his vocal performances appear to be at times erratic. Would a reunion be a massive let down or would it be a massive success like Fleetwood Mac?