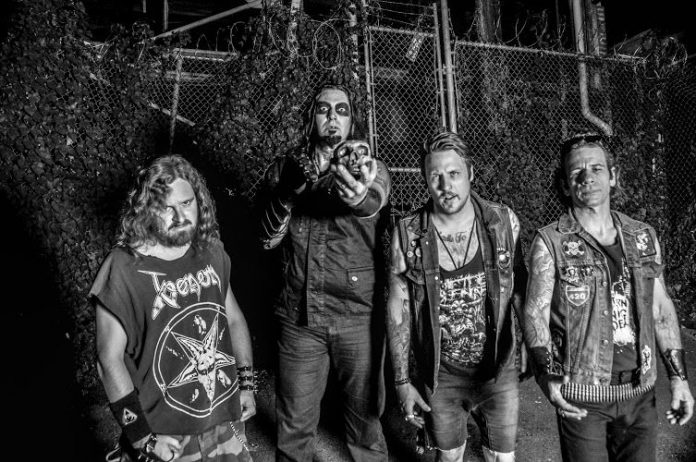 We sit down with Twan from the brilliant new Canadian groove metallers Saints Of Death to discuss the now, the future and just why Canada has so many great bands
We’ll start specifically with the record. For a new band, you sound very certain, there’s no feel of
trying things out, it’s like you already know what you want?
We definitely have an idea of what we want and are doing everything possible to achieve our goals. We’ve all been playing for a long time so we’re starting to get the hang of it haha.
The sound on the EP with the double bass – was this a plan or did it just happen organically?
The double bass always the idea, however it didn’t go exactly as planned at first. We played around with a lot of ideas, and decided Twan would play the 8 string and then found the best cabs with the best tone for each bass.
Lyrically the content is very politically driven. Obviously having a lot of anger in metal isn’t new,
but you guys seem to have definite views to channel it down, again was this a plan at the outset?
No, it wasn’t our original plan to be a political band but fuck, the world is so messed up right now. We had no choice but to speak what was on our minds about the corruption and manipulation of truth going on across the globe.
Now some questions about the band generally: how hard is it these days for a new band to be noticed?
It’s very hard these days because because everybody can have a recording studio in the kitchen, living rooms and basement, so you can record music anywhere anytime.  Also with the digital world advancing  so far over the last 10 years,  technically you don’t even have  to know how to play music.  The computer will do everything for you, so I think honestly it’s a lot harder.  That being said the good bands always come to the top and get notice with a lot of hard work and dedication but generally it’s harder.
Following on from that: What’s the plans now, where do you want to take this?
As far as can. We want to finish writing our full length album and do some video stuff this winter, then we want to play the biggest, baddest tours we can in the summer!
We are a British based website, so a question on that, would you have any thoughts on coming over here?
We would love to come over there! We have a plan, and hopefully if we stick to it and keep working hard we will be over there as well as Mexico and Japan as soon as possible!
Canada seems to be a very fertile scene right now, with bands of all types coming out and making great music, any thoughts as to why that is?
Canada has always been a great breeding ground for music because of Canada’s rich and diverse culture! Different types of Metal have really really been on the for front of the local scenes here for a while and doesn’t show any sign of slowing down! Canadians know how to drink beer and head bang, that’s for sure!
A couple of generic questions. Who were the bands that inspired you to make this music?
There are so many, of all genres! Pantera, Lamb of God, Overkill and Black Sabbath were huge influences. We all listen to different types of metal. You can here different styles of metal throughout all our songs!
Are there any bands you have come across that our readers might not know about that you’d like to highlight
We’ve been playing shows with Obsidian, Slaughterhauser and Without Mercy! We also did a couple dates with The Golers! Those guys are all super awesome and deserve as much exposure as they can get!
And finally, what’s been your own personal highlight as a band so far?
Our tour was awesome, and the release of our debut EP. We’ve got to play a bunch of awesome shows so far, and they’re only getting bigger and better!
The EP is out now, download it here. http://saintsofdeath.bandcamp.com/album/saints-of-death-s-t-ep