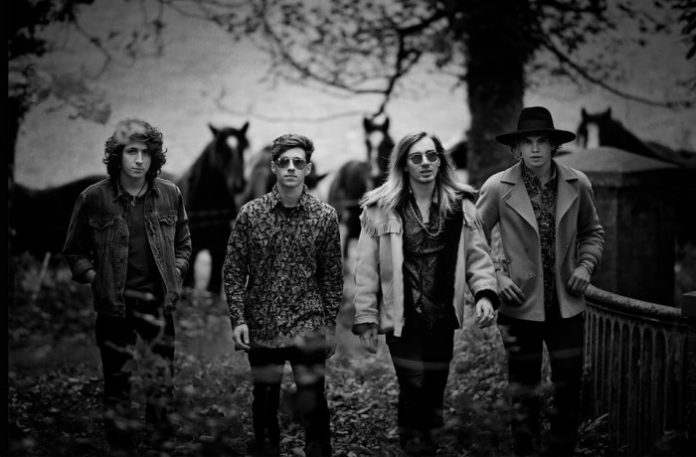 Luke from the fast rising UK rockers on improvements, singles and telling Simon Cowell to piss off (metaphorically)

For those that know only the couple of songs you’ve got on Spotify, sum up, if you can, your career to date?

Well the band’s first gig was just over a year ago, since which we’ve been playing pretty relentlessly in London and so far, just about every gig we’ve played has lead to something bigger and better! I think we’ve all been surprised at how fast the process has been. Having said that, we all had high expectations and we’ve worked hard on getting the things we thought were right, right! As of right now, I think we can look back to 2015 as a fantastic year, and look forward to 2016 as an even better one

The look and feel of the band – and this is meant as a compliment- is not the conventional young rock band. Were there always a more “classic rock” elements to your tastes growing up?

Every member of the band probably has their own perspective on this matter, but the underlying truth is that we’ve all grown up to enjoy that genre of music, which definitely comes hand in hand with a certain aesthetic that we admire, and because we enjoy it so much, it takes a certain pressure off our shoulders regarding “conformity” in modern music, hence maybe the unconventionality!

Therefore, at the start of the band, was this sound always an aim, or was it something that organically occurred?

Well we all had a old school upbringing, but that doesn’t really mean much seeing as that’s such a vast topic…  the first time Mike and I (Luke) jammed together we realized that we were approaching similar music (fundamentally blues music) from completely different angles. That’s when a really interesting process began wherein we both worked to jigsaw each other’s playing together. From there each member of the band brings a different component  and creatively we blend in and out of each other’s styles very easily to now create the sound that we want to put out at the very moment, but it’s not something that is ever accomplished, the interest also lies in evolution.

The two songs you’ve released online, do they represent what the rest of your material might sound like?

They represent a good fragment of the sound, however not all our songs sound like them, as much as they don’t sound anything like each other… Our new material probably has a more similar aesthetic seeing as we’re honing in on a sound that we like at the present moment. It’s also important to reflect on what the audience puts into a song when they listen to it, after all, the listener is like  the reader, the composer is like the author; the author is dead – Roland Barthes.

Being made a Classic Rock magazine single of the week must’ve been a thrill?

That was, and still is a brilliant thing to have accomplished, a lot of us grew up buying that magazine…There are very few magazines nowadays that have both the prestige and integrity of Classic rock, for us it is a great privilege to have been selected for single of the week, based on output, so we feel very much honoured.

Looking ahead now to the future, what about 2016, what has it got in store for Paves?

Recording/ touring across the UK sometime around March/ April/ May!

You sound like a band that thrives on playing live? Is that the case, and if so what can we expect from a tour?

We’ve always understood the value of live music, so it is primordial for us to thrive onstage which I think we do. We all have strong personalities and when we get in front of an audience, they come out in a very apparent way, I think we feel there is something proove. Live performances for us, are a way to flick a virtual switch in every member of the audience’s senses and hopefully involve them physically and emotionally.

Album, or EP, or just more singles, what’s next?

How hard is that choice these days?

It really depends on your plan, and we thought as a band that we’d prefer the creative challenge of releasing an independent body of work on a regular basis.

Finally, following on from that, if we are doing this interview in a years time, say, where do you want the band to be?

It would obviously be fantastic leading the lineup on some of the amazing festivals around the UK and Europe, but most of all we’d just love to still be lucky enough to be doing something we love and hopefully be getting recognition for it!

And one very last question: there’s a boom it seems in what we might call “retro rock” right now. Any thoughts as to what that might be down to?

Well firstly I think there is still a massive demographic that would tell Simon Cowell, Justin Bieber, Pitbull, One Direction, Coldplay, David Guetta, Nicki Minaj, and Drake (to name but a few) to piss off, and secondly, the demographic aforementioned,  or at least the majority of it understands the roots of contemporary music. People still want to hear not only the past but a reinterpretation of the past. It is this reinterpretation that is thriving at the moment!