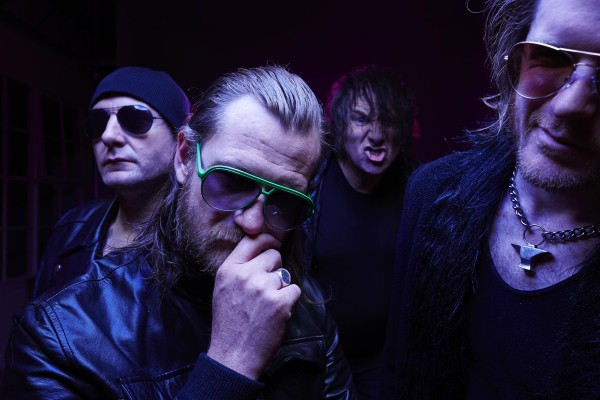 As their new record was released this week, it seemed like the ideal opportunity to catch up with Mikey and Bones from the magnificent Mammoth Mammoth to shoot the breeze. Find out why the drugs they are on change the sound of the record, and why its always been rock and roll for them.

The new record is lyrically very hedonistic. How much of it is real and how much is fantasy?

MIKEY: It’s pretty much all real, all my lyrics are basically inspired by real life shit Im dealing with or things that have happened to me in the past.We all like to go pretty hard, especially on tour, we do try to give ourselves a bit of downtime but that usually doesn’t last very long.

As young guys growing up, was this the sort of music you always wanted to make?

MIKEY: For me it has always been Rock n Roll.We all grew up on AC/DC, Rose Tattoo, The Angels, Chisel etc. It’s the only music I thought existed as a little kid.

BONES: So that is deep in our memory, but not at the front of what we do, or how we improvise our jams. There’s so many other influences, influences outside of music too. I’ve always maintained we are more influenced by each other and the energy we create, than what we’ve listened to in the past.That’s what reigns supreme.

There are a couple of real trippy moments on the record, I’m thinking of“High As A Kite” and to a lesser extent “Electric Sunshine,” does that organically happen or is it a plan to have different styles?

MIKEY: Definitely organic, it’s kinda whatever drugs we’re on when we’re jamming! We have written a lot of that kinda stuff before but it hasn’t madeit onto albums, we have been heading down that path more and more lately.

BONES: “Electric…..” was one of the first songs, and “….Kite” one of the last ­ a whole lot other hectic, fucked up shit took place in between the writing of those two cruisers.

You guys have been together with the same line up for a long time. Does that make recording easier in that you all know your jobs?

MIKEY: Not only recording it makes everything about the band run like a machine, we all have specific roles in other ways too, Cuz does a lot of our design, Bones has a big part in finances and dealing with Napalm, Pete does a lot of booking kinda stuff and I have a lot of dealings with lawyers.

BONES: We are the busiest lazy cunts I know.

Coming from Melbourne must present its own challenges. How difficult is it for an Australian band to break through outside of your homeland?

MIKEY: It’s pretty tough because we’re so fucking far away from everything,most Australian bands are just big in Australia. Which isn’t big at all really.

BONES: From day one a bunch of fans started to build up in Europe and theUSA. Because they were among our first and most loyal fans, we have always paid an enormous respect to them. The difficult part is getting over to tour just because of the stupid distance. But we aim to travel as much as we can before we even think about the next album. Naturally Napalm Records have been really good in that area too.

How is the music scene over in Australia? Anyone coming through that we should know about?

BONES:We’ve never been into scenes. We pretty much go our own way. Melbourne has a lot of live venues and therefore a shit load of live bands too The heavier end is okay. I agree, King Parrot are taking matters into their own hands, we respect that. Jackson Firebird share our label and have a unique approach too, not super heavy, but great dudes with a very strong act.

Future plans: can we expect a tour in Europe at any point?

BONES: We’ve been rehearsing up to start playing live from April 24 here in Australia, Then we have plans to spend some time over there in your summer,which is grouse because Melbourne sucks in winter. We have a festival booked and we’ll do club dates as well. Stay tuned!

MIKEY: It takes a little bit of getting used to that’s for sure, and make sure there aren’t any cat’s in the house!