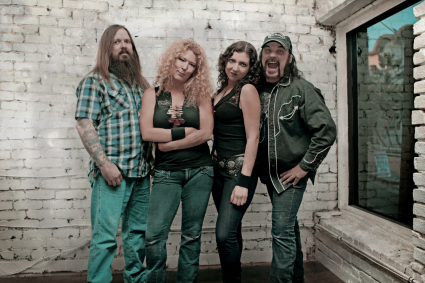 As Nashville prepare to release their best of in the middle of next month, we ask respected writer Wayne Robins for his thoughts.

“If there’s ever been a better band to open for Motorhead, I’ve not heard them!”— Lemmy, when asked about NASHVILLE PUSSY.

Now, there’s a temptation to let the above quote stand alone and just go to the nearest pub. What can I possibly add to God’s words? Isn’t that a sin anyways? Well, while you’re pondering that predicament here’s another quote to suck on. “Seeing Nashville Pussy is as close to seeing ACDC in the 70’s as you’re going to get”— from The Story Of The Album Highway To Hell by Joe Bonomo.

So for those of you who have been living under a rock, let someone who lives “for ROCK” quickly educate you about one of the best bands I’ve ever seen–NASHVILLE PUSSY. In fact a great place to start would be the band’s brand new cd compilation TEN YEARS OF PUSSY on SPV.

This 22 track monster takes the best studio tracks of the last decade and even throws in a live bonus ep taken from an blistering 2009 show at Nottingham- a show I was privileged to be at! But I must first warn you, TEN YEARS OF PUSSY is the “ultimate rock n’ roll party cd!”-and you can quote ME on that one.

Once you put it on you’ll be either be dancing, fucking, or fighting. Maybe all at the same time. NASHVILLE PUSSY are a band who hail from Atlanta, deep in the heart of “the BBQ NATION” and sound like ACDC slap boxing with LYNYRD SKYNYRD while MOTORHEAD watches.

They were formed by a husband and wife team of Blaine Cartwright and Ruyter Suys and were born out of the ashes of Blaine’s former band NINE POUND HAMMER back in 1997( In fact Blaine met Ruyter and original bassist Corey Parks at Nine Pound Hammer gigs).

Since then they have played over 1,000 gigs in 40 different countries, gathered a GRAMMY nomination, and have toured with, MOTORHEAD, ZZ TOP, LYNYRD SKYNYRD, SLAYER, and a host of other heros who became instant fans. Ruyter was even voted one of the best female rock performers ever.They have weathered numerous labels, trends and bass players. And, when counted out, have consistently pulled off resurrections that make Jesus look like a rank amateur.

The 16 studio tracks from TEN YEARS OF PUSSY are taken from the band’s 3 SPV releases. The most recent, last year’s UP THE DOSAGE, has been called NASHVILLE PUSSY’S BACK IN BLACK and was pick of the week on THAT METAL SHOW. FROM HELL TO TEXAS, the band’s 2009 cd, was recorded at WILLIE NELSON’S studio in Texas and features the band’s strongest songwriting. And GET SOME from 2005, was the first SPV release and the first collaboration with DANIEL REY, and has more hooks than a hillbilly’s tackle box. And of course the bonus live CD, including the ultimate version of NUTBUSH CITY LIMITS with special guest Ron Heathman from THE SUPERSUCKERS on guitar.

But enough history. If you want history check out Wikipedia. This is Rock n’ Roll! Put on TEN YEARS OF PUSSY and celebrate the band’s recent past and while looking forward to rocking with them in the near future. I know I’ll be there!!