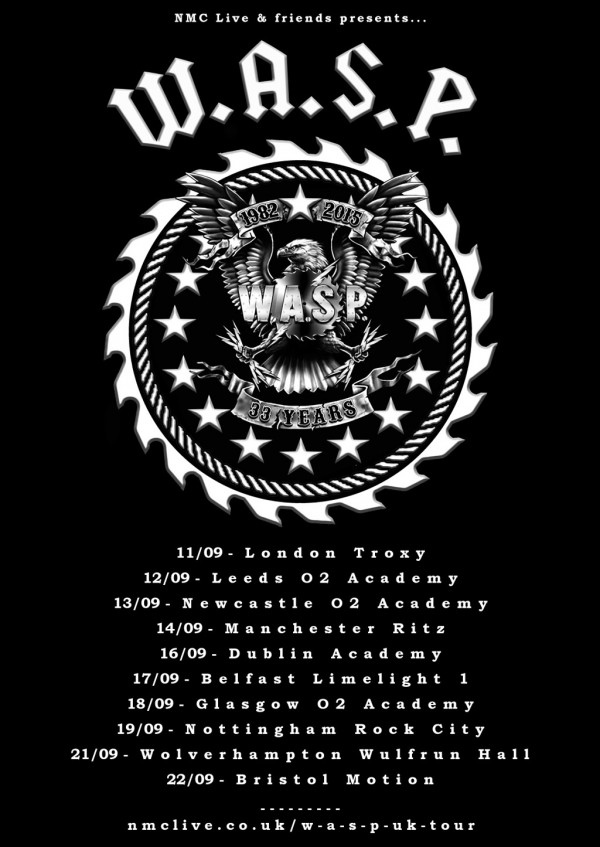 Blackie and the lads back on the road

W.A.S.P. have announced a ten date tour of the UK and Ireland which kicks off at The Troxy in London on September 11, 2015 to promote their highly anticipated and long awaited new album ‘Golgotha’ due on Napalm Records in August.

Tickets go on general sale at 11am on May 1 (Friday) via NMC Live http://www.nmclive.co.uk/w-a-s-p-uk-tour/

Almost six years have passed since the world saw a new studio album from Metal Icons W.A.S.P. That is about to change as W.A.S.P. has signed a new worldwide record deal with Austria’s Napalm Records.W.A.S.P. will release their 15th studio album titled Golgotha this August.

W.A.S.P. came out of the Los Angeles Metal scene in 1982 gaining notoriety for their shock rock antics. With a career spanning over 3 decades, 17 world tours, and now their 15th studio album, they are a metal band that has evolved in maturity without having lost their signature sound, unlike many of their peers from their origins. Golgotha will continue down the path that 2007’s Dominator and 2009’s Babylon started on, both in production style and theme. Six years in the making, Golgotha will undoubtedly lead the listeners on the emotionally epic undertaking that W.A.S.P. has become acclaimed for!