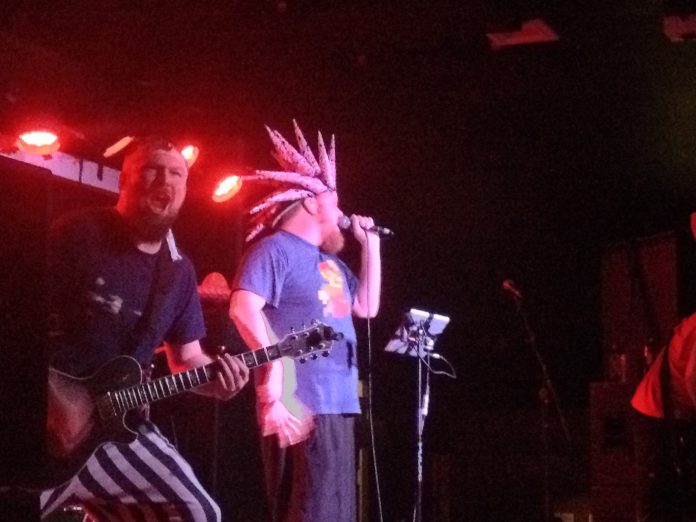 “We are like the story in a porno” is how Destroyed Beyond Belief say hello. What singer Sean actually means – we think – is that they are they only straight ahead metal band on this bill. Of course this neglects the fact that they also tell jokes about Jesus and anal sex, as well as pouring themselves a cup of tea – all inside the first ten minutes. For the sake of argument we’ll go with the premise. The fact is that, though, for all the messing about, when Destroyed play their songs they are phenomenal. “Death Before Destruction” and new one “End Of Days” could strip paint off walls and take on Slayer in a knife fight, but there’s the other side to DBB. The side that realises this all a bit of a giggle and we’ve all got work tomorrow, so ferocious metal needs a smile on its face sometimes, which is precisely why they can hammer out “Team America” in homage to tonight’s main attractions, some of whom appear at the side of the stage as they do. And thats exactly why they can flick the switch and crush on “Devildriver”. As we are being American tonight, try this: Destroyed Beyond Belief rule y’all. However, appropriately for a band who came on to “God Save The Queen” they are very British, which means they are probably either too modest to say it or too drunk to care.

For twenty years off and on Maryland’s self-styled “humourcore” purveyors have assaulting the senses like the bastard sons of Zappa – or at the very least The Cardiacs second cousins.

Singer Todd Smith decides the audience is the place to enjoy this from and duly spends most of his time there, drinking from people’s glasses and flasks, as well as asking to see their, urrmmm, “intimate videos.” While all this is going on the band behind him play a schizophrenic brand of metal and Lord knows what else.

“The Sacrifice Of Mrs Rose Covington” is viscous – and when Smith screams “the power of Christ commands you,” you become a believer. The barmy nature of it all is best exemplified by the point that just before this, he’d crooned Elton John’s “Can You Feel The Love Tonight.” And the bewilderment continues with “Nude In The Wilderness” which melds reggae and giant power chords and pretty much anything else you can imagine. In between all this, the occasional catchy song breaks out “Sweet Nothing” is like a honky tonk in a meth lab, “Pogo The Clown” is a rockabilly stomp, while “Acid Memoir” needs no explanation.

Then, just because, they knock out a passable stab at “Creeping Death” which segues into “Kiss From A Rose” by Seal…to no ones great surprise. After this, they take requests and truly let their hair down and they end their hour pretty much the way it started, with the sonic chaos of “Darkest Days.” Dog Fashion Disco, then: pretty close to being unique.

And, speaking of unique; Arizona’s Psychostick have proved over the years that they are pretty much unlike anything else. Even if we allow for the fact that most comedy metal – ok just Steel Panther, then – sucks ass, there’s something pretty incredible about a band that does what Psychostick does. That is to say, they emerge wearing a magnificent array of headgear, and play a song called “Bruce Campbell” which includes a Kazoo solo. This is the band’s first ever UK jaunt and they appear to be more excited about it than a 12 year boy that has the house to themselves and have just discovered Red Tube. And yet there’s something intoxicating about what amounts to a thrash metal version of Kenny Loggins’ “Danger Zone” while throwing paper aeroplanes into the audience. There’s also “The World’s Shortest Song” and there’s “This Song Is Not A Song It’s A Sandwich” – and actually they are cleverer pastiches than you might think. The slo-mo mosh pit is great fun, and “Hate Times 8” gives the impression of being made up on the spot. The “ballad” they air, “Orgasm Equals Love” is pure filth, and gets a circle pit. Bet that never happens when Poison do “Every Rose Has Its Thorn.”

In case it’s not clear, a Psychostick show is about more than music. “Sombrero” sees an audience member given the head gear with the rest of the crowd encouraged to get it from him.. On occasion it feels like you’ve walked into a Frat Party and you either buy into that ethos or you don’t. There’s no message here – “Dogs Like Socks” is like an extreme metal nursery rhyme – and that’s kind of the point. Certainly Wolverhampton gets it, and the band are given a heroes reception.

For MV’s taste they are better when they are doing the pastiches rather than the outright dumb stuff like “Quack Kills” but like the UK’s Evil Scarecrow, they know how to entertain their audience – and the slap bass funk of “Because Boobs” does just that.

Spending an hour in this world is something like being in a mash up of Wayne’s World and Beavis And Butthead with Green Jelly providing the soundtrack. “Beer” proves that admirably and the closing “Obey The Beard” is pretty much their anthem.

Psychostick and Dog Fashion Disco called this jaunt the Ugly Americans Tour. There was something rather different than ugly here, and if nothing else think of this: just by here you were informed that God has a beard and facial hair can bring world peace. It was that kind of night.