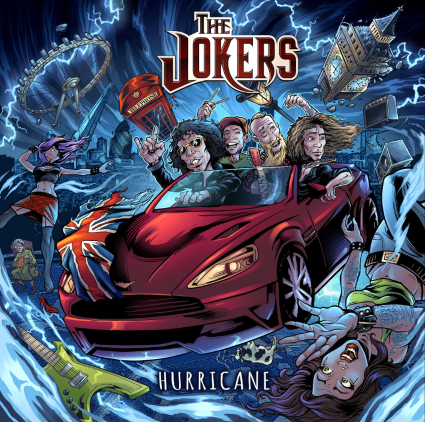 It’s an interesting thing. But whatever trends come and go in this musical world, where the next big thing is the next year’s out of date fad, there’s something unique about British hard rock.

It doesn’t sound like anyone else’s brand of hard rock, and yet it never sounds dated. You can put whatever flourishes on it that you like, but it’s ours. From Uriah Heep to UFO, to Thunder, Magnum and FM, this island – which after all started heavy metal – is still the best there is at it.

Faced with this type of history – and bear in mind too that all the bands in the above paragraph are still making brilliant music – it’s perhaps harder for this type of sound to gain a foothold when it’s a new band. That doesn’t mean they stop trying, though, and like the lottery winner who believed the “it could be you” slogan when no one else did, you might just come up with the combination required for four or five numbers and a tidy sum.

Of course, if you are really lucky – or in this case talented – you might just hit the damn jackpot.

In which case, step forward The Jokers.

The Liverpool four piece don’t shy away from comparison with the past, quite the opposite. They take them on head on a fist fight and probably land as many blows as anyone else. “Run 4 Cover,” opens this thing and comes on like Led Zep being all mystical and then decides to settle for a hook and a chorus instead.

And did someone say big? Did someone say swagger? Did say someone sassy? If they did then the title track is on hand to sort you out. “Play The Funky Music” on steroids, with a big old dirty riff. It knows it’s good. It knows that you know it’s good and it dares you not to admit it.

Of course, if you are a looking for the soundtrack to rouse the rabble then the AC/DC groove of “Lockdown” is here to help, but then even the laid back tunes here are out to cause trouble. The psychedelics of “Her Word Is Love” begin “nobody in the room tonight is planning things the same as me.” The mind boggles.

We might say that “Everywhere I Go” out Thunder’s Thunder, and “Angel” is a mighty slab of Bluesy, shimmering rock n roll as “Hurricane” admirably covers all the bases that it needs to.

There’s also a couple of moments of genuine tenderness. “Dream” is a massive Power Ballad in the best sense of those tracks, and “Summer Time” is a warm, flowery acoustic strum that might be worthy of Whitesnake’s most recent material. Like Dame David it’s as English as Bacon and Egg sandwiches and moaning about the weather.

Rather appropriately “Hurricane” blows out of town with “Rockerman” – a chugger with some clever use of harmonica, it sums up The Jokers brilliantly. “I’m the man I am,” it says “I’m the man, Rockerman.”

There’s absolutely nothing about “Hurricane” with any pretence at all. Cut it open and it bleeds Hard Rock. That’s no joke, either.