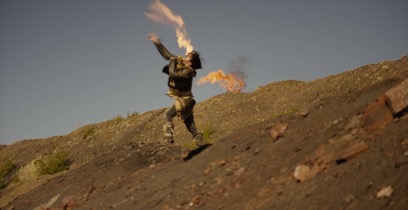 British Punk-Industrialists PROTAFIELD, have just released an explosive music video for their new single ‘= Pure’ which is taken from their latest album ‘Nemesis’. Protafield deliver a boldly diverse sound, one that helped catapult ‘Nemesis’ into the mainstream, but also features a guest line up unlike no other.

Hailing from South Wales – UK, Protafield’s Jayce Lewis spent months making a music video with ‘Man of Steel’ D.O.P Keefa Chan, hiring an open cast for a month, bikers, trucks and a car armed with machine gun’s the solo artist was adamant on raising the levels in music and music video making.

“When I saw bands beginning to put out lyric videos, that’s when I thought things were going wrong, I was so tired – LIKE EVERYONE ELSE!! Of seeing bands in a warehouse, or in a field…  then these computer CGI lyric video’s came from nowhere, and that was it…..What’s happened to creative imagination?” says Jayce Lewis.

“This video almost killed us making it everything is real, the fire, the speed, Petrol bombs, the numerous near 90mph collisions, the carnage.. this is what Music videos should be about, when I saw these lyric videos popping up, It really saddened me that creative inspiration was being cheapened, F*ck that!!”