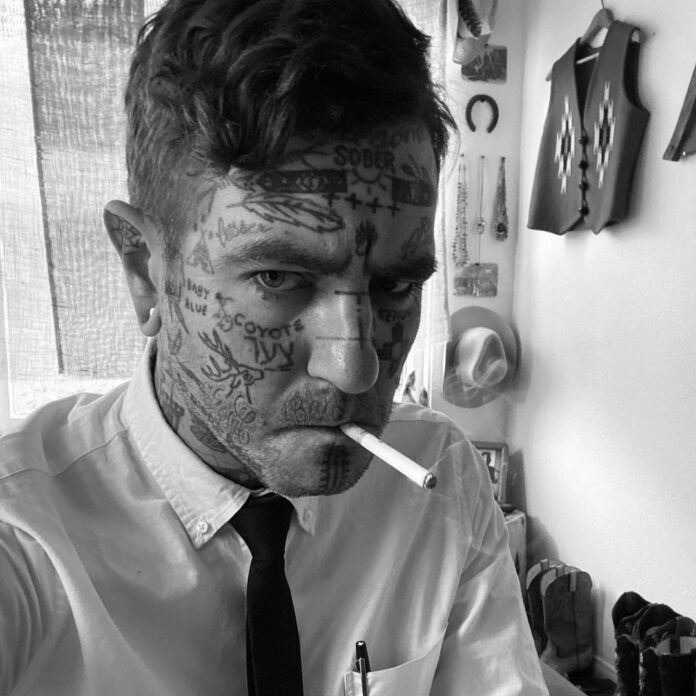 Fences, the alias of singer-songwriter Christopher Mansfield, has teamed up with acclaimed musician Bonnie “Prince” Billy (Will Oldham) on a new 2-track release called ‘Niagara,’ out on April 1st via ENCI Records.

The title track “Niagara” is an original, while track 2 is a cover of The Rolling Stones’ “Sympathy for the Devil.”

Of the collaboration, Mansfield says, “Working with someone who unknowingly informed you on the process of what it is you do can be jarring. Self-doubt inflates, ego inflates. Whatever is possible to feel will be felt. Two entirely different humans in their own personal timelines trying to essentially find the same song. One is further along the track, yet the track is a circle and two people eventually meet. Consider it not being “lapped” but rather evidence of how a circle works. They will pass and you will pass and then someone else will circle back to you, forever. To quote Ram Dass “You feel in the moment how it is all related to each other and it keeps blowing your mind”. I feel entirely grateful to have worked with Bonnie Prince Billy and if I may be child-like for a moment, it blew my damn mind.”

Oldham adds, “Most people take for granted that music is inherently about connection and communication. Music is so good and so available that most folks think it just IS. I live for the connection, for the idea that making music will bring me to the table with the likes of Christopher (Fences): someone new to me who is a living, breathing, fluent, damaged, energized, and inspiring worker-in-song, finding it in himself to not only give me the time of day, but to actually invite me to sit and work with him.”

In the past Fences has collaborated on music with the likes of Billy Strings, Tegan & Sara, Macklemore, Death Cab for Cutie’s Chris Walla, Jacquire King (Of Monsters and Men), Nile Marr (son of Johnny Marr), Cedric Bixler-Zavala (The Mars Volta, At The Drive-In) and Ryan Lewis.

Released in late-April 2021 via ENCI Records, Fences’ most recent LP ‘Wide Eyed Elk Ensemble’ builds on the sounds of his previous effort, the critically acclaimed LP ‘Failure Sculptures,’ which was also released as an expanded deluxe edition in 2021.

With unanimous praise from outlets like Paste Magazine, Clash, Spin, American Songwriter, and others, Fences hopes to be back out on the road soon.

What others have said about Fences:

“Breezy, rustic, big-hearted indie-folk songs that should appeal to fans of Lord Huron, Manchester Orchestra, and other stuff of that ilk.” – Brooklynvegan

“a vivid, poetic encounter with a talent operating on his own terms” Clash

“Fences, the nom de guerre of the tattooed singer-guitarist Christopher Mansfield, teams up with Billy Strings on the bluegrass performer’s new collaboration “Globe.” It’s a beautiful love ballad about our minute place in the grand scheme of the universe.”- Rolling Stone

“…alongside down-and-out saints with vigour like Townes Van Zandt, Elliott Smith, and The Cure, Mansfield sears vivid scenes rooted in hardship, drinking, despair and fear of losing love into the psyche…..yet at all times he does so with a hand on his pop pistol, ready to blast completely into smithereens what, on paper, would look like just another hushed singer-songwriter on a downer” –Drowned In Sound

“… a further testament to Christopher Mansfield’s deeply emotional and expressive songwriting. Writers such as Mansfield remind us that pop can still be spiritual, sublime, its expressive qualities capable of elevating the spirits and challenging our preconceptions about art of any kind.”- PopMatters

“Don’t let the fact that he looks like an extra from Sons Of Anarchy fool you because Chris Mansfield is a pretty sensitive dude. He doesn’t follow anyone on Twitter, so he’s infinitely more productive and prolific than you are. Sorry.”- Noisey

“As an artist, Mansfield is comfortable in many lanes. He can croon with an acoustic or glide on a house beat or singe on a hip-hop track hook. His talent is malleable…”- American Songwriter