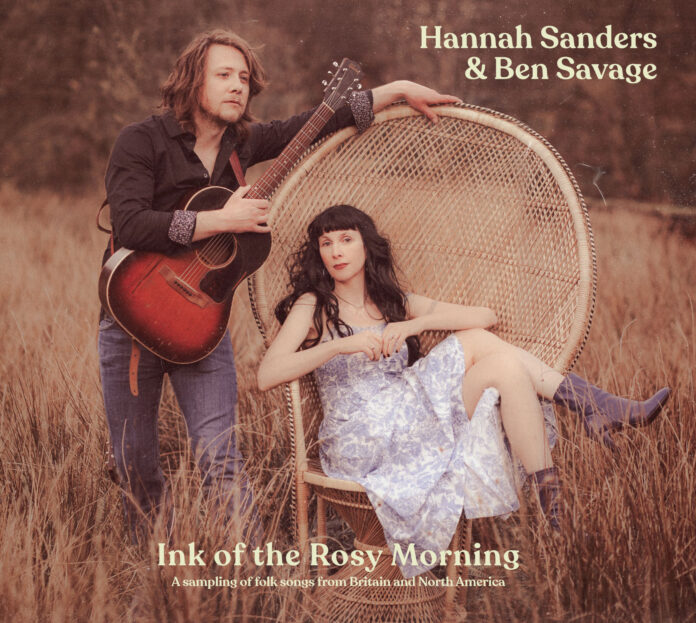 Today, Cambridge folk-duo Hannah Sanders & Ben Savage release their masterful work, Ink of the Rosy Morning. An album that grew from a spirit of spontaneity and their desire to capture “directness and power through simplicity,” what you are hearing are songs that Hannah & Ben have long held to their heart, and, as Ben himself explains, “When you’ve known songs for that long, you don’t think about it, you just play them.”

Ink of the Rosy Morning, a collection of these beloved songs, includes the two essential singles, ‘A Winter’s Night‘ and ‘False True Love,’ There is ‘Lovely Joan,’ a song which Hannah learned from the singing of her mum, an original in ‘A-Life, A-Lie’ alongside other traditionals to which Hannah & Ben give their indelible touch.. The title, ‘Ink Of The Rosy Morning,’ is itself a line from the sublime Nova Scotia ballad ‘When First I Came To Caledonia’, learned from Chris Wood and Andy Cutting (“the great British opus of duo music”, insists Ben).

Their latest single is ‘Polly O Polly.’ A dark tale of two lovers, with the titular Polly being led to her doom, the spirited track showcases the musical synergy of Hannah & Ben, as well as the deep history between Folk & America music. This song was one which Hannah would sing while trawling through Europe in a converted Bedford school van with her family band.

Speaking of the track, Hannah explains: “Many moons ago I travelled to a storytelling festival in Wenlock Edge and David Holt dropped into the bus for tea & stories and sung this song with his banjo. I was immediately struck by the economy of the storytelling and the dark, menacing melody. He gave me a cassette which I played to death. Some years later I heard him and Doc [Martin] play this at Newport Folk Festival. I never ‘played it out’, but Ben immediately knew how to bring it to air.”

This duet recreates perfectly the intimate sessions that, without intention, blossomed into the spellbinding body of work which we now know as Ink of the Rosy Morning. They had their third effort almost ready to roll: finished tracks, guest artists and everything. Then the world changed, and with it, their mindset and thus, their music. “It was,” says Ben Savage hesitatingly, “liberating!”

Choosing instead to record in a quiet former schoolhouse by the sea in Hastings for a few days, they sat in the dining room, lit the fire, opened a bottle of wine, set up a few mics and played. Nothing pre-arranged. No grand scheme. No pre-production. No demos. No thought of releasing anything from it. All of this makes what they emerged with, Ink Of The Rosy Morning, all the more extraordinary.

Hannah and Ben’s musical ideals have been shaped by multiple styles and influences (from Hannah’s teenage years in a touring family band and a lengthy sojourn in America to Ben’s study of the dobro and successes playing with The Willows), exceptional songwriting skills and the array of instruments they can both turn their hands to. Yet way back, both had also been initially fired up by the music and culture of East Anglian folk clubs and this was the music to which they instinctively gravitated. And thus, ‘Ink Of The Rosy Morning’ is a magnificently intimate and engaging successor to their previous albums ‘Before The Sun’ (2016) and ‘Awake’ (2018).
Ink of the Rosy Morning is out now on Topic Records.