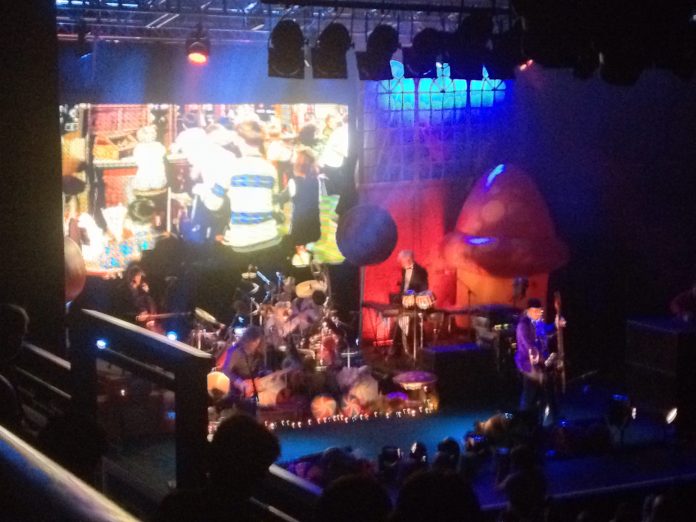 Andy likes the first set and the encore, but gets left cold by the – literally – musical interlude

Back when it was still funny (and to anyone under the age of 25, it really was) there’s an episode of The Simpson’s where Homer is trying to take an interest in Marge’s new-found love of the theatre. Surveying the programme for the venue, he tries to seem excited: “An evening with Philip Glass,” he chirrups. “Just an evening?!”

MVM is reminded of that scene when thinking about “An Evening With Primus And The Chocolate Factory, ” for that is what is in prospect tonight. Because, blimey the trio can take some odd old turns and only the strong need apply.

First, a quick history lesson. Beavis and Butthead, the worlds greatest ever reviewers got people of a certain vintage into Primus. “Wynona’s Big Brown Beaver” to be precise. It was “cool” and didn’t “suck” and Les Claypool, the clown prince of batshit mental behind this mob, played bass in a way we’d never heard before, over songs we’d never come across the likes of. Then there’s the superb guitar from Larry LaLonde, and the perfectly placed drum patterns of Tim Alexander. We didn’t know what it was then. Now we do. Its originality.

It’s fitting, then, that Wynona flashes her beaver as the third song in this mammoth go. The first bit you see is kind of a Greatest Hits section. Which means the bluesy shuffle of “American Life,” the crazy “Lee Van Cleefe” and “My Name Is Mud” slams it’s way into a wonderful “Jerry Was A Racecar Driver,” in what passes – for Primus anyway – as a conventional way. Sure, they jam, they stretch and they are something between rock, metal, jazz and a mind altering substance or two, but compared to what comes next it’s as straightforward as The X Factor.

If the first hour was like Zappa covering Rush, then the second. Well, what the hell is the second?

Another brief diversion is required. Last year, when it came to make their eighth record, Primus decided they weren’t odd enough. And what they did – you know, because they can, was re-imagine the Willy Wonka And The Chocolate Factory soundtrack.

If that sounds mad, then in practice, it’s like nothing you’ve ever seen. MV has witnessed plenty of things at gigs but never a xylophone solo. There’s one of those in “Golden Ticket.”

There’s also more inflatables than at your average Flaming Lips show and more fancy dress than you can shake a Willy Wonka hat at. Claypool dresses as the eponymous hero for “Pure Imagination” and keeps the garb on. This is clearly some labour of love for him – the film apparently an obsession of his as a child.

At this point this writer had best come clean – and a switch to first person narration is required. What this half of MV knows about films can be written on a pinhead, and what I know about musicals can penned next to it. Furthermore although I read the book as a lad, let’s just say I’m not the audience for this type of experiment and leave it there.

Oompa Loompas make an appearance – frequently – and there is no doubt people are loving the spectacle. MV, if we are honest, is looking at the giant blow up toadstool at the back of the stage and thinking “blimey that looks like a bellend,” which isn’t very mature, but really happened.

And if that makes me a philistine then I’ll accept that. The ticket cost me a good amount of money and wasn’t free (just in case anyone thinks I was on the guestlist) and I’m sure if you can buy into the musical, it’s great. I don’t and therefore it isn’t.

The encore sees Primus back as Primus again and it’s ace. There’s a brilliant jam in “Southbound Pachyderm,” and there’s really clever video of the Oompa Loompas at various local landmarks in the closing “Here Come The Bastards,” which showed that the show has been thought about hugely.

I’ll even concede there’s an audience for the second set, if you’ll concede I’m not it. Even for Primus – and I might be in a minority of one – this is a step too far.