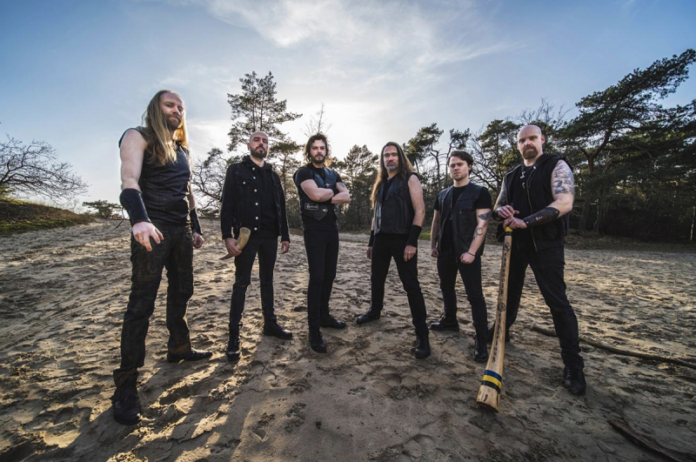 Since the release of their impressive 2005 debut, De strijdlust is geboren, HEIDEVOLK have taken the heavy music scene by storm, conquering stages throughout the world with their very own brand of pagan folk metal. Following their latest offering, the much-acclaimed, VUUR VAN VERZET (2015), February 24, 2023 will see the Dutch band release their seventh studio masterpiece, WEDERKEER, through Napalm Records.

The band comments:
“Today we proudly present our third music video from WEDERKEER!
The titletrack “Wederkeer” is a powerful acoustic anthem about inner strength, pride and beliefs. In the video we witness a young woman wandering through the cold dark forest. She is lost yet something inside her fuels her quest and tells her to persist. Suddenly a luring hymn draws her to the scene of glimmering flares of a fire through the trees, and shadows of men singing a pure and uncompromising anthem. When she eventually enters the circle of light, the scene she thought she witnessed has disappeared, as if it was never there…

With the release of our new album drawing near this raw acoustic track gives you yet another glimpse of what is coming your way. Join us, for the Pagan Metal Brotherhood is on the rise!”

In a world of myths, nature and legends of the Veluwe region of the Netherlands, the band‘s upcoming concept album – based on the interpretations of the runes – is a powerful odyssey of the Self, deeply rooted in metal and folklore. WEDERKEER (meaning to “return” or “revive”) invites the listener to take a step back from the incessant barrage of media and stimuli and look inside to find out who we are, what is driving us, what our values are, and what we‘ve learned from life up until now.

With dual clean vocals, irresistibly catchy songs, traditional instruments and fast metal riffing all fueled by their folkloric fire and pagan pride, HEIDEVOLK delivers an uncompromising sound and musical adventure. WEDERKEER, makes no exception, and proves why the Arnhem-based six-piece is one of the best, unrivaled and most exciting bands of their genre and beyond!
The album was recorded at Sandlane Recording Facilities, mixed by Joost van den Broek and mastered by Darius van Helfteren. HEIDEVOLK knows how to perfectly release proud hymns and direct, in-your-face metal songs, and the addition of broad choirs and various folk musicians on vocals, violins, cello, bukkehorns and more traditional medieval instruments, make WEDERKEER not only a bombastic folk and pagan metal record at its best, but a glorious album return for HEIDEVOLK!