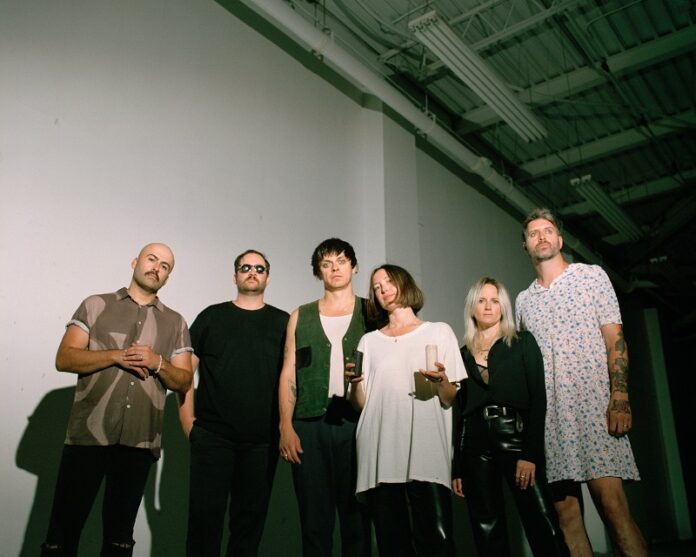 July Talk marks the release of Remember Never Before with a lyric video for ‘When You Stop,’ hand-drawn and animated by band co-leads Leah and Peter. ‘When You Stop,’ a swirling cyclone of a song, is about courage. A chase scene, a jump cut, a monster in the room: ‘When You Stop’ plunges straight into the pit of your stomach.

With ‘When You Stop’ and the album as a whole, July Talk asks some tough questions: What did you miss? What did you face? Who are you now? Remember Never Before is an album about not taking for granted the opportunity to bring people together and be with your community. It’s an album of matter over mind. Instincts. Guts. Radical acceptance of who we are; giant hopefulness for who we can be.

Remember Never Before thrashes against the conditions (conditioning) and goes harder and heavier than ever before, with relentless riffs and driving percussion whipping up a frenzy around Peter and Leah’s ecstatic, elastic voices. This is what happens when you say what you feel. This is also what happens when you add a second drummer.

On Remember Never Before you’ll hear songs like ‘Human Side,’ which begins as a line drawing and becomes a full blown portrait of human fallibility with its contrast of light and shadow. “Human Side” rails against that need to be right. Why can’t all of life’s lessons be disco dance parties?

‘G-d Mother Fire’ rips into the air with a triumphant hook. The viewpoint of this track is inherently punk, anti-establishment: learn what’s stuck in your way and then burn it all to start again. Especially here, we feel the album’s main messages of hope and persistence. Don’t give up. Mull that over as that hook melts itself into your mind.

As it rolls in on motoric drums, ‘Silent Type’ moves towards the edge of what’s known. It’s the soundtrack to an arrival, there’s no turning back. Direct and responsible, the song knows what’s at stake: “I’d rather take the fall than be told what to do.”

Hidden in the background of ‘Twenty Four Hours’ is the mantric chant of the album title, “Remember never before,” magic words to cast, or break, the spell.

There’s no hiding behind anything on ‘Raw.’ Part Sartre, part Iggy Pop, ‘Raw’ showcases Peter’s voice as he gently puts his heart on his sleeve. “The song was a lot harder to live than it was to write.”

Cathartic in its observance of change, Remember Never Before is July Talk, now.

Listen to the album here and watch the lyric video for ‘When You Stop’ below.