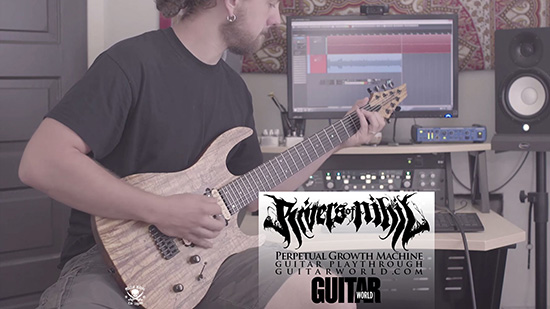 RIVERS OF NIHIL recently band filmed an exclusive play through video for their song “Perpetual Growth Machine“. The video was shot and directed by Paul Chrismer. Check out the video atGuitarWorld.com, the online home of Guitar World Magazine HERE.

“Perpetual Growth Machine” comes off the band’s sophomore release “Monarchy“. The record will be available worldwide on Metal Blade Records on August 21, 2015. The first video from the album was shot this past weekend and is being directed by David Brodsky (GWAR, Whitechapel, Battlecross).

No Clean Singing is streaming the title track “Monarchy“. Check out the stream of the songHERE.

An additional new track, along with pre-order bundles, is available online now. Fans can visitmetalblade.com/riversofnihil to hear “Perpetual Growth Machine” and reserve copies now. The band will hit the road in support of the new album this fall, dates are expected to be announced soon.