REVIEW: YELLOWTOOTH – Crushed By The Wheels Of Progress (2015) 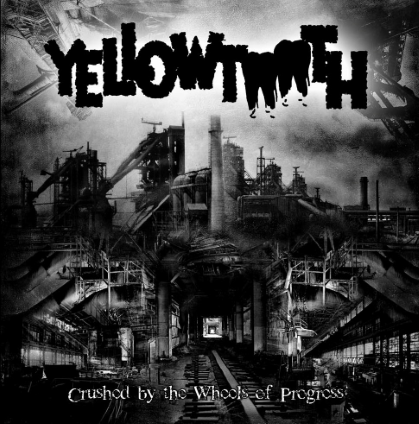 
When a record begins thus:

“Are you the one that killed our friend?”
“That’s right, I shot the boy too and I enjoyed it…..”

It’s fair to say that you aren’t going to get anything too cuddly. Those two sentences are exactly how Yellowtooth choose to kick off this brilliant piece of nastiness. The track that begins this way, “Meet Mr. Mossberg” then elects to rumble into view on the back of a mighty riff and great slabs of vitriol.

It’s probably fair to say that if you enjoy the opener you might want to investigate the rest of it, because, give or take the odd moment, “Crushed…..” is a monolithic one trick pony. “Climb The Mountain,” for example, doesn’t so much scale the heights to the summit as smash the damn thing down.

“Season’s End” provides what passes for light and shade amongst the eight tracks here, adding of a kind of Alice In Chains type chorus and Motörhead like boogie. “Manifesto” on the other hand is one party that you would vote for – displaying the kind of anger that our own underground heroes Beholder have made a stock in trade.

Everything here, though, has to bow to the title track. All eight and a half minutes of it. It’s ominous, foreboding intro is one thing, the guttural roar of the first vocal is quite another. Its a stunning, bludgeoning dose.

The record itself leaves us basically as it joined. In a morass of anger. “Before I Return To Dust” comes with the chilling thought that “I won’t forget.” Which is kinda scary, and “Virginia Creeper” doesn’t creep anywhere. It kicks your door down and demands something, it doesn’t care what.

Given that one point they suggest they will “target your kind.” You most probably wouldn’t want to meet them down a dark alley in the early hours, but being in the world of Yellowtooth for a while is quite the exhilarating ride.

Perhaps the best way to describe the contents of the record is thus: if Phil Anselmo and Pepper Keenan were driving round in a massive truck, in the heat. In the desert. While suffering from road rage, “Crushed By The Wheels Of Progress” would be the perfect soundtrack.