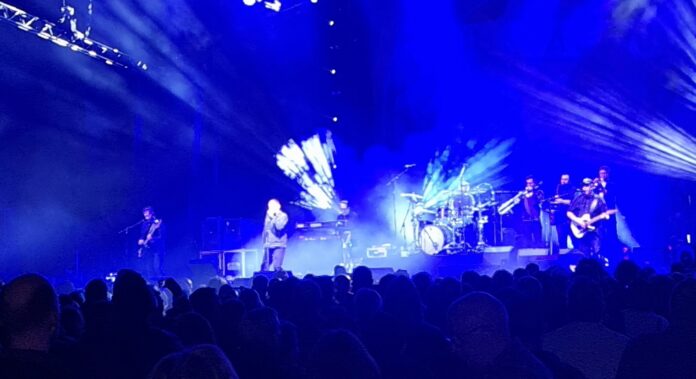 Watching the crowd go all kinds of crazy when Paul Heaton played “Happy Hour,” “Perfect Ten” and “You Keep It All In” at the end of the evening was a stark reminder as to how you get to this level. How you get thousands to your shows, has never changed: your music must connect.

Three or so hours earlier, we’d had a reminder of the other side of the coin. Billy Bragg had just begun his set with “Greetings To The New Brunette” (he’d changed the lyrics to reflect the success of The Lionesses) when some fool on the floor had started singing “I was 21 years when I wrote this song, that’s what we want!” A cursory look at the setlist would have explained he hasn’t played “A New England” for ages (probably because he was 21 years when he wrote the thing and it no longer reflects him, just a thought).

That was bad enough, but a little later he’d played “Sexuality” – complete with a wonderful slice of Steel Guitar from CJ Hillman. He’d changed the words to express solidarity with the Trans community and was explaining why, when some bigoted fool on the floor (I think the same one) yelled boorishly “you’re a man or a woman, that’s it, Bragg!” Pointedly the next song “Mid Century Modern” was dedicated to “the geezers my age who don’t understand”.

One idiot aside, Bragg though, can reflect on a 45 minutes well done. He’s got some wonderful songs. “Tank Park Salute” is genuinely beautiful, “Levi Stubbs Tears” is as good as it gets, and “There Is Power In A Union” is especially powerful given the situation 12 years of Tory destruction have caused in this country.

Indeed, as “Waiting For The Great Leap Forwards” ends things and he’s joined by his son, Jack Valero, you are left to reflect on the career of Billy Bragg. Maybe he’s not the incendiary singer songwriter anymore, but the same empathy is always there in the words, and probably the deeds too. If ever there was an example of staying true to your beliefs but evolving perfectly, it’s Billy Bragg.

“We’ve been visiting football grounds everywhere on this tour”, says Paul Heaton, halfway through this set. “You’re probably not interested but I am going to tell you anyway……”

Rewind about six weeks and I’d been at the other arena in Birmingham. There was a poster for the Paul Heaton and Jacqui Abbott gig and a thought hit me: Christ, they’ve got some brilliant tracks and I’ve never seen them.

I grew up in the 1980s, the Housemartins were everywhere. Then I got the Beautiful South Greatest Hits in the 90s. The upshot of this is Paul Heaton is on stage for about an hour and 50 minutes and he’s basically tossing off solid gold hits in all that time.

Note the wording. “He’s”. Abbott is poorly and unable to play, and whilst her vocals are missed, obviously, they get through it, bassist Chris takes her part on “Too Much For One (Not Enough For Two)” for example. The show is riotous fun all the same.

I’d forgotten, to be truthful, how much I used to love The Beautiful South, but that is rectified by the trio of  “One Last Love Song”, “Old Red Eyes Is Back” and “A Little Time” (which has a very different arrangement here), all of these are copper bottom classics that everyone would know and no one could dislike.

There’s a name I keep coming back to throughout this (and not just because they usually share a keyboard player in Stephen Large): Squeeze. The same broad appeal, the same clever songs and the occasional foray into left-wing politics.

Another from Heaton and Abbott’s number one album, “A Good Day Is Hard to Find” fits into this perfectly, and there’s a couple of Housemartins tunes, “Five Get Over Excited” is particularly impressive, as is South’s “Liars Bar”, which sees the horn section right to the fore, giving it a real New Orleans second line vibe.

A couple of the others are really interesting. “My Mothers Womb” and “Heatongrad” (it’s anti monarchy first line alone is enough to win friends here!) is a proper manifesto, and it essentially ushers in the crescendo that all arena gigs need.

This is brilliantly paced, and takes in “Rotterdam (Or Anywhere)”, “Song For Whoever” – which is sung superbly by drummer Pete – and “Good As Gold (Stupid As Mud)” before it carries on regardless (sorry!) with The Housemartin’s “Think For A Minute”.

Which brings us back to where this review started, and the two encores. These are mega hits and played as such. Massive balloons float round in “…Hour” for example, and “….In” is particularly good. After that, there’s just one more and Heaton says: “Maybe you can join us for a sing-song and fill yourself with positivity for the rest of the week…..” what follows is “Caravan Of Love” and it does bring a collective vibe.

It seems a bit facile to say that someone who has just held an arena enthralled for getting on for two hours goes under the radar, but Paul Heaton fits the description. He’s not a rock star, he’s just a normal bloke who can write mighty fine pop songs. He proved that here, and sometimes that’s all you need.

Previous article
INTO EXILE
Next article
BAND OF THE DAY: KETAMINE KOW