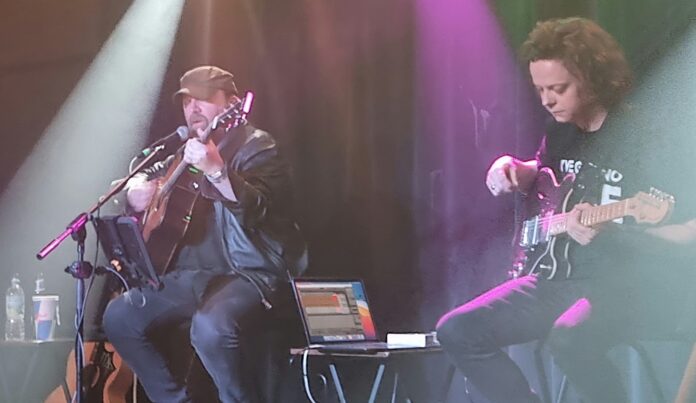 For myriad boring reasons MV doesn’t arrive into the room where the gig is playing until two songs into Love Amongst Ruin’s set. I spend the first couple of minutes going “who the hell’s that, I recognise him!” I guess that was always the way with Steve Hewitt’s revolving door policy to his collective. But, still, I never expected to see Gizz Butt sitting there playing acoustic. He probably didn’t either (“this is the first time I’ve ever played like this, I am still punk!” he says at one point,”. What can’t be argued though, is that Hewitt has made an inspired choice and there’s a real emotion and a kind of bristling anger to songs like “Paper Tigers”, while “Truth” – dedicated to the people of Ukraine – is particularly charged. “Watch Myself” (“it’s a new song to us, they are all new to you” notes Hewitt). “Menace Ballad” darkly lurks, and the closing “So Close” – with clever sampling this one is actually pretty heavy – ends a set that had a tremendous warmth. Maybe old punks can do acoustic, but a cover of “Every Little Thing Counts” wouldn’t have gone amiss, would it Gizz….?

As Hewitt had noted in LAR’s set. “Him off the telly” is across the corridor in the big room. Gok Wan is doing whatever Gok Wan does, and its particularly amusing to watch the people, dressed for a night out, who arrive in the Institute 3, take one look and turn around again damn sharpish. The contrast couldn’t be starker. Most of the people here  – onstage and off – are dressed less for a night out than a night sleeping rough, but then, so it should be with music, right?

The matter in hand is simple. A few weeks ago Paul Draper released “Cult Leader Tactics”. A truly brilliant record, barmy, baffling, catchy. The sort that only he could have made.

He’s on stage for 75 minutes, here and its brilliant – frequently. Baffling – occasionally. Catchy – mostly, and the sound of an artist who seems have rediscovered the old fire.

Performing here with Ben Sink, the guitarist in his band, Draper clearly totally believes in the new stuff (“did you buy the album?” he enquires. Then after much cheering the words, “well why the fuck didn’t it get higher in the charts then?” shoot back). The vinyl did go top five though, and its title track, which opens the show proves why.

Gratifyingly he’s dusted off a couple from the first solo record too. “Annie” and its arguable highlight “Friends Make The Worst Enemies” are superb examples of it, but Draper knows that there’s an elephant in the room, so when he says “I used to be in a band, here’s a couple of songs of theirs” its something of an understatement.

Mansun were one of the finest, most original bands of the 90s. Their lyrics – his lyrics – were incredible and “Negative” and “Disgusting” have lost none of their power here.

Make no mistake about it, though, this new stuff belongs in the same bracket. As “Dirty Trix”, “U Killed My Fish” and others underline. Here though, sprinkled with “The Chad Who Loved Me”, the always phenomenal “Legacy” and the big hit “Wide Open Spaces”, the balance is just about right.

The encore, though shows you exactly what Draper thinks of “Cult Leader Tactics”. Both songs are from it. “You Got No Life Skills, Baby” is truly a modern day classic, and if “Lying About Who U Sleep With” is, according to Draper, “the story of my life, maybe its every one’s, I dunno” then he’s nailed his own music. I would explain why but I’m off to sleep with Kylie….

An acoustic gig of the more raucous variety. There’s football chants and a woman at the front who claims to have done half a gram of coke before she came out, its that kind of night. Unconventional, but with Paul Draper it was ever thus. And you wouldn’t want him any other way.