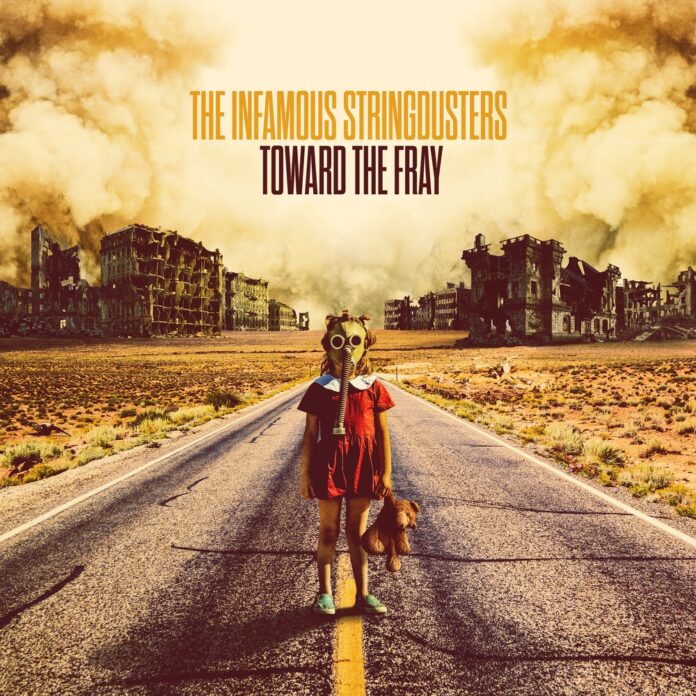 There’s not much I don’t like about doing MV, but if there’s one thing, it’s the lack of ability to explore. Like, when I was a kid and I heard The Electric Boys, say, for the first time, off I headed on a voyage of discovery. Finding every vaguely funky, 60s influenced rock band I could.

I can’t do that these days, given the never ending emails that flood to the MV inbox every day, but that thought struck me when listening to “Toward The Fray”.  Back in July 2018, one warm summer night, I’d gone to the local folk club to see a band that I’d reviewed earlier that year. I See Hawks In LA were brilliant that night. One of those rare evenings where everything just seems to align perfectly. In years gone by I’d have been spending the next few weeks looking for every Americana band like them.

And if I had, I’d have definitely been all over The Infamous Stringdusters.

“Toward The Fray,” then, in all candour, is the first record I’ve ever heard of the five piece. Goodness me, though, it’s a stunner.

A lockdown record (in more ways than one, we’ll get to that) the members – Travis Book (bass), Andy Falco (guitar), Jeremy Garrett (fiddle), Andy Hall (Dobro), and Chris Pandolfi (banjo) all sent their parts in digitally, before when restrictions eased, they were able to get together.

From the bluegrass tinged “Hard Line”, however, its striking how organic this all sounds. There’s such a warmth to the music. So much so, in fact, that it wasn’t until I’d lived with, and listened to, the album a lot that it became clear just how dark the words were.

“The truth can’t be just what you choose” is a key line on the opener, given that it seems to set up the whole of “….Fray” as it discusses that which has fragmented society and driven us apart. Faultlines that have been ever more evident with the pandemic.

“I’m Not Alone” on which the fiddle seems to gently weep, is even more sombre in tone, but there’s some real catchy songs here too. Apparently this is the first Stringdusters album to feature drums, and they give “I Didn’t Know” a real texture. You won’t resist its chorus, either.

“Means To An End” whips up a real storm. There’s a picture in the press stuff of the band onstage, and they look like they attack their instruments with a real force. There’s a Celtic feel to the title track too. The sort of thing that I heard on Steve Earle & The Del McCoury Band’s record (which thinking about it may have been the first time I listened to Bluegrass). “There can be no peace if justice is denied,” goes a lyric here, and given the band say the killing of George Floyd had a profound effect on the songwriting, then I think we can guess the point here.

The harmonies on “Pearl Of Carolina” are beautiful and if so much of this has appeared hewn from the rocks then “Down From The Mountain” seems to make that literal. This, though, more than anything is a band with an incredible talent, and nowhere is that better shown, perhaps than on the instrumental “Revolution”. The jam is stunning, it really is.

“How Do I Know” is more classic country in tone, while the fact that this is just a rock band without the rock, if you will, is never better underlined than on “Spirits Wild”, which if it was in the hands of Eagles,, for example, would shake arenas (and lack the fun and spontaneity of this). “When Will I Ride Again” strikes a bleaker tone, and “Till I’m Satisfied” offers more questions than answers I suppose. But then, this is a record that reflects it’s times after all.

The word you keep coming back to with “Toward The Fray”, however is that one we’ve used a few times: warmth. That seems to underscore all of this, with a real empathy and an exasperation at the modern world.

Another Grammy is theirs, surely.