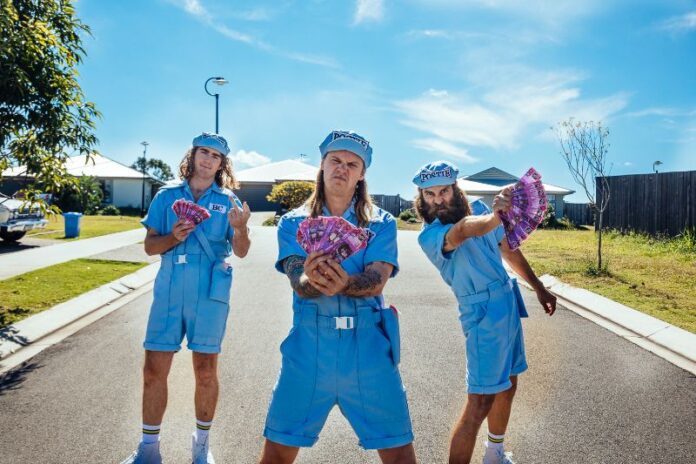 Dune Rats are no strangers to writing songs about their love for substance. New single ‘Melted Into Two’ is their first song of substance about love!

The third single from the bands forthcoming album ‘Real Rare Whale’, ‘Melted Into Two’ was the first song the band wrote for the new album and was written with their good mate Shane Parsons from DZ Deathrays during a writing session on Stradbroke Island in Queensland.

“This song is the closest thing to a love song we’ve written,” the Dunies confessed. “It grew from meeting a young couple at a bar who talked about a time when they were on acid and believed if they tried hard enough, they could melt into each other, creating one person. We reckon you can meet people throughout life, whether it be romantic or not, that you become so close too and in tune with, that you become one.”

The video for ‘Melted Into Two’ tells the story perfectly. Featuring bass player Brett’s sister Kelly Jansch (also member of kick-arse punk band TOTTY) and her partner Ellie, the band witnessed their love story unfolding firsthand and felt it was the epitome of what they were expressing in the song. They asked the couple if they would be open to sharing their story as part of the video and they generously agreed.

‘Melted Into Two’ follows previous singles ‘What A Memorable Night’ and the triple j Hottest 100 fav ‘UP’ from the bands fourth studio album ‘Real Rare Whale’, which due to a manufacturing issue with the vinyl has had to be delayed one month and will now be released on 29th July 2022.

‘Real Rare Whale’ follows on from their consecutive #1 ARIA albums, 2020’s ‘Hurry Up And Wait’ and 2017’s ‘The Kids Will Know It’s Bullshit’. Recorded with acclaimed producer Scott Horscroft, the band relocated to Eden on the south coast of New South Wales for 3 months at the height of the pandemic and set out to write an album that was opposite to the negativity going on in the world. The result is an album full of fun and melodic rock n’ roll.

“Real Rare Whale is hands down the fastest, funnest and most insane album we’ve ever recorded,” the Dunies said on recording the album. It’s an album that expresses the love of music and writing songs. Songs that will be epic to play live to thousands of sweaty bodies having a great time.”

The band have out done themselves with ‘Real Rare Whale’ album bundles. From fluro pink and green vinyl, skate decks, tees, hats and even a special ‘Real Rare Whale’ bong are on offer so fans can immerse themselves into the 10 glorious punk rock tunes when they arrive on 29th July. Check out the range here.