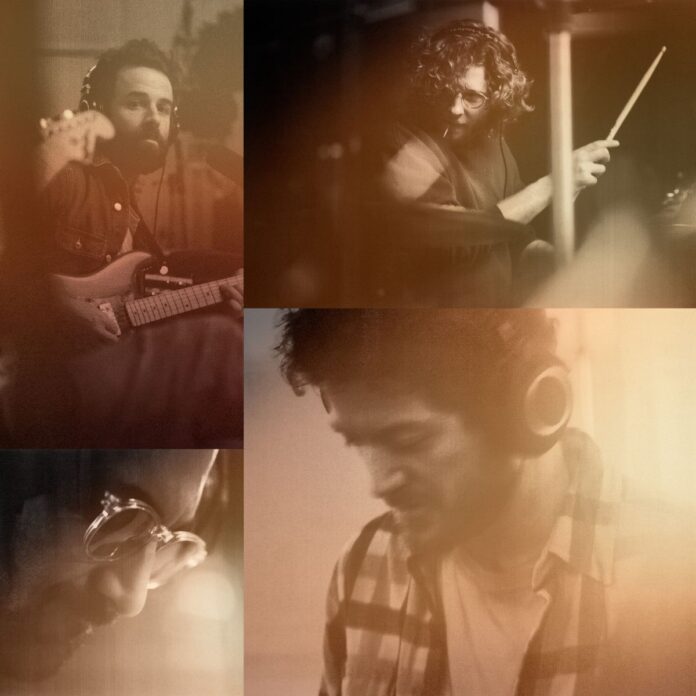 “I had this riff and one of the verses for a while,” says Dawes frontman Taylor Goldsmith. “Griffin, Wylie and Mike Viola came over to my backyard – this was peak Covid – to just play music together for one of the first times since lockdown. I started sharing the song and Griffin and Mike started singing their background parts you hear on the choruses on the record immediately. It inspired me to finish writing it.

“The lyric is about the arbitrary demands I make on myself. I want to perceive me or my life a certain way but I make no exceptions for an off day or a misstep. Whether it’s a win or a loss, it’s all transient, and only when I can live in some version of that awareness – which is itself transient – am I able to bat away any fears or anxieties or the consequences of an over indulged ego.“

“We’ve always prided ourselves on being minimalists. With this record we set out on being MAXIMALISTS,” says Goldsmith. “Still a quartet. Still not letting these songs hide behind any tricks or effects. But really letting the songs breathe and stretch and live however they want to. We decided to stop having any regard for short attention spans. Our ambitions go beyond the musical with this one.

“We also wanted to honor the traditional length of a vinyl record – 40-45 minutes – but disregard any concern for numbers of tracks. The way Miles or Herbie often did. Documenting the songs is only half of the picture. For this record, they’re also the platform for us to jump off from and get lost in. I think the best way I can say it is – we wanted this record to be less a collection of songs and more a collection of music.“

“We wanted a musical drama, an ensemble cast with linked arms kicking highly; a transcription of a band meeting we haven’t even had yet,” adds bassist Wylie Gelber. “Eight legs and eight arms, in a room, stretching deeper than we ever knew we could…The Intros have Outros. The Outros have Bridges.“

MISADVENTURES OF DOOMSCROLLER was first heralded earlier this month by the album’s epic opening track, “Someone Else’s Café / Doomscroller Tries to Relax,” available now at all DSPs and streaming services. An official performance video is streaming now via YouTube.

Dawes will mark the arrival of MISADVENTURES OF DOOMSCROLLER with a wide-ranging international live schedule, including headline shows, festival performances, and a summer tour with The Head and The Heart. Highlights include a very special Independence Day event with Phil Lesh & Friends, set for Monday, July 4 at Asbury Park, NJ’s Stone Pony Summer Stage. Additional dates will be announced. For complete details and ticket availability, please visit dawestheband.com/tour.