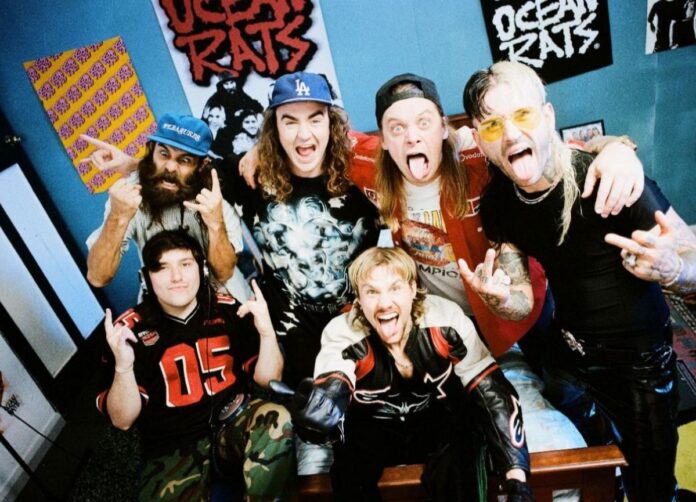 The perfect collab does exist, and in 2022 it prevails in the form of the brand new single and music video ‘BORED’, boasting Oddworld icons Ocean Grove teaming up with fellow beloved party-starters Dune Rats.

Offering one last mouthwatering peek at Ocean Grove‘s impending new album Up In The Air Forever,  out tomorrow 22nd April on UNFD, ‘BORED’ is a boisterous and bustling ode to the frustrations and stifled energy from the past few years, delivered with delectable Ocean Grove creamy bounce and some rambunctious flair with Dune Rats along for the ride.

Also accompanying the track’s release today is an entirely apt music video, with the “Ocean Rats”, aka OG and the Dunies, bringing the pent-up party vibes to the bedroom of a kid ready to bust off the shackles of full-blown boredom.

Perfectly complementing the nostalgic flavours of the track, the ‘BORED’ music video also features plenty of throwbacks like Discmans and old-school video games alongside the larrikin tinges. Also armed with some modern sonic grunge and a criminally catchy chorus you’ll definitely want to shout along to, ‘BORED’is the ultimate antidote to the frustrations of the past few years, while also marking a significant reminder to Ocean Grove about the importance of their burgeoning Oddworld universe, as the band explains: “This song is what you get when you place your two favourite bands into a room during what felt like a never-ending lockdown for two years and ask them to sit still. Writing this song was the perfect way to funnel our pent up energy and irritation into something cathartic and positive – much like the entire album.”

“Really, we were the opposite of bored when it came to writing and recording this absolute thrasher – it was fun as f***! It was a timely reminder of just how important Oddworld music is to us and that it will always be the silver bullet to the mundanity we feel exerted around us on a daily basis. That’s essentially what this song is all about. It’s a laugh in the face of so- called authority, the wet blanket throwers, the nay-sayers. Anyone too afraid of change, to be bold, to take risks and who dampen the spirit of others in the process. It’s bin behaviour and to that we say “f*** that!”. We couldn’t think of a more legendary bunch of larrikins than Dune Rats to help escalate this song’s rascal energy. So when we got ’em to enter the Oddworld for a sing-along, we knew ‘BORED’ was destined for greatness…as are the lot of ya!!!”

With the imminent release of Ocean Grove‘s third studio album Up In The Air Forever tomorrow, April 22, ‘BORED’will keep you anything but right down to the wire before this latest OG chapter unleashes tomorrow. But that’s not all – another special Ocean Grove treat lies in wait for Melbourne fans, with an interactive pop-up shop quite literally popping up this Sunday April 24; an all-ages Oddworld extravaganza in Fitzroy, which will offer fans a chance to come take photos with the band, interact with official Oddworld installations and get all their goodies signed. There’ll be heaps to take home on the day – exclusive vinyl variants, 1-of-1 merchandise and other secret items! In fact, pretty much anything you can see or touch, other than the kitchen sink, can be yours to purchase for your very own OG shrine! Come as you are, and get your antidote to the mundane.

‘UP IN THE AIR FOREVER’ – OUT FRIDAY 22 APRIL
unfd.lnk.to/upintheairforever