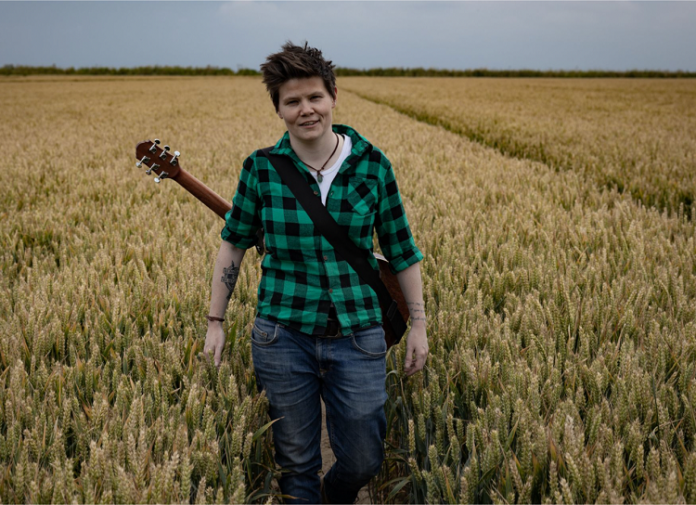 More than a decade after first emerging, Grace Petrie stands out as one the most important songwriters working in the UK today. After the release of her album ‘Connectivity’ in 2021, which reached 37 in The Official UK Album Chart and topped the UK download chart week of release, Grace is excited to be back on the road this May and June for a headline UK tour. Please see full details below.

Exploding onto the folk scene in 2010 with the low-fi acoustic guitar/vocal release ‘Tell Me a Story,’ Petrie quickly attracted attention with her polemical folk anthems, acerbic lyricism and open-hearted performance style. Support slots for the likes of Billy Bragg and Emmy the Great soon followed, with the Guardian declaring her “a powerful new songwriting voice”.

The 2010s were spent relentlessly touring and, responding to the evermore dramatic political landscape, Petrie released five DIY albums of protest music in seven years. As a support act for similarly subversive voices in stand-up like Robin Ince, Josie Long and Jeremy Hardy among many others, Petrie became just as celebrated in comedy as in music, honing a stage presence characterised by wit and warmth that sits beautifully in both worlds. Gigging everywhere from the Latitude Comedy Stage to the main stage of Vancouver Folk Festival, from Radio 4’s the Now Show to 6music’s Tom Robinson show, she picked up an army of supporters from punk, folk, DIY and stand-up along the way, and by 2018, Petrie’s audience numbered enough that a crowd- funding campaign for her first studio-produced album ‘Queer As Folk’ smashed its £10K target in 24hrs.

But it was the 2018 release of ‘Queer As Folk’ which catapulted Petrie from cult status to mainstream attention. Both in production and songwriting, the record was a clear graduation, with rave reviews across the folk press calling it ‘probably the most intelligently crafted album you’ll hear this year – ****’ (R2) and commenting, ‘she’s the urgent, pulsing, compassionate talent this world desperately needs’ (The Observer). Lead single Black Tie, a tender reflection on growing up queer and framed as a letter to her teenage self about the happier future that lies ahead, has deservedly become an anthem for queer audiences of all ages, with over 150K views on Youtube and over 600K streams on Spotify alone. Off the success of Black Tie, Petrie was embraced by cultural heavyweights: The Guilty Feminist podcast adopted her as a frequent musical guest, the legendary Jo Whiley hosted her for a live Radio 2 session, Emmy-winning Hannah Gadsby requested her as a support in Europe and Frank Turner invited her to open his 12-date UK arena tour. The New Yorker gave a glowing live review that hailed Black Tie as ‘a new gay anthem’, and Petrie as ‘a sort of butch lesbian Billy Bragg’. UK festivals from Cambridge Folk to Glastonbury’s prestigious Acoustic Stage recognised her as a top flight artist and her debut Australian tour in Spring 2020 culminated in sold-out shows in Melbourne and Sydney.

…It was all going so well! The coronavirus reached Sydney just as Petrie’s tour did and, after a mad dash for an early flight home, she spent the next year and a half – the longest period of her adult life in one place – unable to commune with others through music in the way that was innate to her since childhood. With a planet in crisis, a government hellbent on ever-harsher anti- immigration legislation and with protest itself on the verge of outlaw, the need for speaking out and for the music of solidarity had never felt more urgent.

From out of this chaos comes ‘Connectivity,’ an album built from the reflections of what humanity means in a world struggling against division and destruction. Glued to one place for the first time, this is a record made firmly out of Petrie’s comfort zone: slowly, intricately, and over many close up, painstaking months. The result is the most honest collection of songs she has ever shared. It is about storms and the rebuilding that follows them, and about how to find a way to carry on the fight for a better tomorrow when every day you are told you’ve already lost. It is Petrie’s most personal – and yet most universal – album to date.