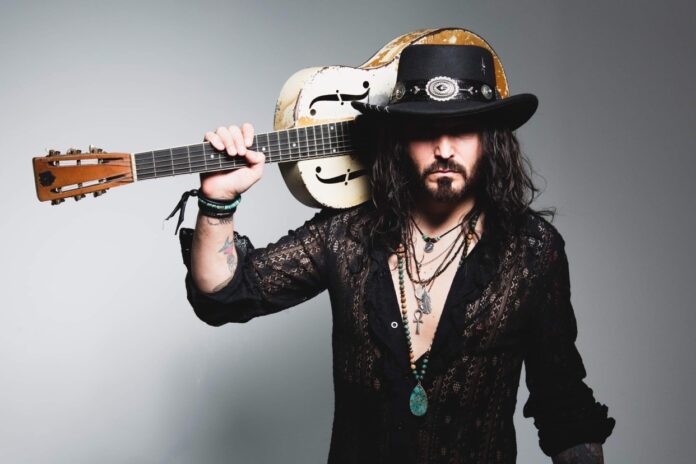 Hot off from winning Hard Rock Hell’s “Blues Artist of the Year” award and following hot on the heals of his recent singles Come On, Gasoline, and Sweet Carolina, Troy Redfern will release the fourth single Mercy from his critically acclaimed album The Wings of Salvation on Wednesday November 16, 2022.

The official music video for Mercy premieres on YouTube on Wednesday November 16th.

Watch the video via https://youtu.be/YEelSbhBd2I.

The new single can be streamed, and the new album The Wings of Salvation can be ordered digitally, on CD or limited edition yellow & red splatter vinyl from https://linktr.ee/TroyRedfern.

The album is available on CD and limited edition yellow and red splatter vinyl formats, plus various bundles from the official Troy Redfern shop – https://troyredfern.com/shop.

Kicking off with a vintage slide riff that sounds like it came straight off a beat-up 45 rpm single, Mercy explodes into a Technicolor soundscape of rock ‘n’ roll euphoria.

Says Troy, “Dave Marks and I also decided early on we wanted an old school aesthetic for this album, in that we wanted no studio fixes, no autotune, no drum editing or samples. It had to be real, with only complete takes, no chopping up parts in post-production to make them sound perfect. We wanted an album that authentically captured my sound. I feel satisfied in knowing that we achieved what we set out to accomplish, and I couldn’t be prouder of this album.”

“My 1935 Dobro resonator features heavily on the new album along with my Magnatone Twilighter amplifier,” reflects Redfern. “I found this to be a killer combination. It’s such a huge tone without the need for layers and layers of guitar tracks.”