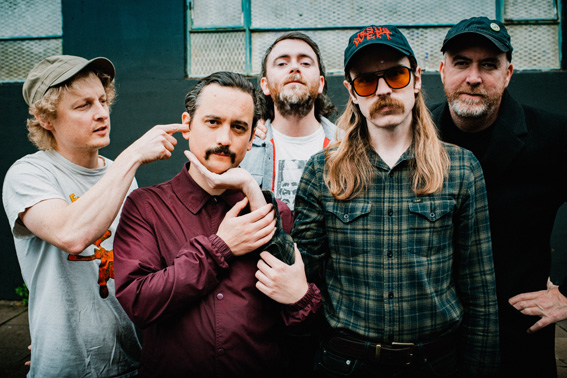 Today they reveal the video for the first single “Mr Medicine” – made by the artist Wilm Danby, known for his paintings and video art for the likes of Palace, Unknown Mortal Orchestra and Bullion. “When I first heard the track, I immediately felt a kind of forward motion, like being pushed forward by an unknown force in a nightmare, toward an unknown place, floating but with no control. Scary but fun…” says Danby. “On repeated listens, it became sort of a mantra with riffs, about transcending fear through some kind of ritual or rite of passage. I wanted to make that ritual happen, to see what it could look like, and if it would work. A stone circle was the obvious place for this, the moon is famously great at transforming things, and transformations are usually very painful!”

“Music is a powerful medicine and it should be consumed daily for mental wellbeing. Mr Medicine’s faithful and highly regarded colleague is Doctor Gig, who we also have on speed dial,”Matt Baty explains. “Lyrically I suppose the sentiment is not too dissimilar to Sister Sledge ‘Lost In Music’, only galvanised by heavy, heavy doses of distortion and really big drum fills.”

The intensity of Land Of Sleeper can be felt right from the outset, thanks to the pulverising drive of opener ‘Ultimate Hammer’  and its rallying cry “I keep spinning out, what a time to be alive”. Yet, whilst ‘TerroPillow’ and ‘Big Rig’ are rich with the band’s trademark Sabbathian power, there’s scope this time around that supercedes anything they’ve previously attempted. Matt’s duet with the traditional folk vocals of Cath Tyler on the closing lament ‘Ball Lightning’, for example, is one particularly potent illustration of their expanded horizons.

In terms of emotional impact, a pinnacle on Land Of Sleeper is ‘The Weatherman’. Replete with devotional rapture and radiant intensity, the band’s attack slowed down to a mantric and mesmeric crawl, it marks a collaboration with the ululatory tones of Bonnacons Of Doom vocalist Kate Smith and a choir including Richard Dawson and Sally Pilikington.