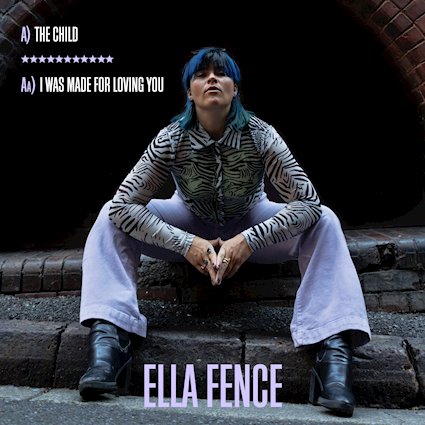 ELLA FENCE releases new videos for double A side single ‘The Child’/’I Was Made For Loving You‘, out now on Golden Robot Records.

Listen/Buy The Child / I Was Made For Loving YouHERE

Like many over the last couple of years, Ella’s lurched between mania and fatigue, from productive to depressed. Still, she shrugs her shoulders with indifference at her plight, noting her problems have been insignificant compared to the magnitude of the suffering of others. It’s been Ella’s defiant survival instinct, (at a time when many have had to find inspiration in the darkest of places) that has shaped her 2022 musical counter attack.

The double A single is two tracks of rock ‘n roll. Rock played just the way they should be, as Ella explains, “Previous recordings I wanted perfect (and I make no apology for that objective), but now I want real. We’re enduring challenging times and people deserve the truth.”  Ella continues, “I was born real not perfect, and I wanted that attitude to be recognised in my music.“

Ella’s new music is the glorification of guitars and monumental vocals. The two songs express a collective community fatigue with a theme of resilience. Ella’s voice magnificently illustrious, that despite the world’s two years of isolation, it’s time to reclaim the streets. It’s been a crazy, complex environment and this release from Ella is an uncomplicated, no nonsense musical experience.

The first of twin singles released is The Child. Ella muses about the the song, “Music is like falling in love, it should be dangerous and reckless. I’ve never been risk adverse and The Child signals a shift stylistically for me. There’s less reliance on technology, this is flesh and blood…..humanity and guitars.”

She continues, “I wrote this song on acoustic guitar. I felt primed and confident vocally and had a cool idea for arrangements. I got together with Brock and Jordan, couple of boys out of Brisbane Pop/Punk band, The Bugs, and hit the studio. Brock was in control of production and Jordan got behind the kit and strapped on the guitar. The three of us sonically collided and that impulsiveness took The Child from embryonic stage to commence evolving. Louie Shelton (yes, that Louie Shelton), the legend Of The Wrecking Crew then blazed a guitar lick of two to the song. As you’d expect Louie gives a masterclass on lead guitar. Louie is a bona fide legend, he’s performed on and shaped songs for John Lennon to Lionel Richie.”

The Child continued to develop and morph, when post Bugs and Louie, the creative baton was passed on to and landed with LA producer, Scott Campbell. Scott laboured over The Child and it was in Scott’s care, the epic-ness of The Child was realised. If you can imagine the picture of the evolution stages of humankind, then you can visualise the creative process that delivered this magnificent song.

Ella’s double A single partner to The Child is the classic KISS song, I Was Made For Loving You, an instantly recognisable piece of music from a band that’s a walking myth.

Be warned, Ella Fence has slapped on the latex gloves and performed sonic open heart surgery on I Was Made For Loving You. She’s removed the existing vital organ and replaced it with a new circulatory system. It’s a transplant of two hearts pulsating, one from a wild boar, the other from a rabid hyena.

Once Ella made her way from the operating theatre it was time to go post op. Cut to: Ella connecting with previously name checked enigmatic US producer Scott Campbell (Alanis Morissette fame). Ella sent Scott the song, Scott acknowledged Ella’s revised version of the epic KISS song, but went “fuck it, let’s explore further spaces outside the original.”

Ella says of producer Scott Campbell, “I was introduced to Scott through my Manager, Stevie Barr. I spoke with Scott in LA and we clicked. He’s a remarkable man, (impressive production resume) and we worked beautifully together. Our aim was to create a version of I Was Made For Loving You that evoked a sense of danger and the end result is a blast.”

So, Ella (with dual wild animal hearts pulsating), ably assisted by Scott, continued going rogue. The creative process went from Ella’s operating table to Scott Campbell’s studio. Here, the musical equivalent of stripping a stolen car, then rebirthing it in a creative junkyard, took place. The KISS classic was overhauled and had the blowtorch taken to it. In the studio, Scott intensified the mix, Ella’s voice elevating to caterwauling, her apocalyptic vocals pulled along by Campbell, including a savage shark alarm guitar attack, courtesy of Axe Man, Tom Livermore.
KISS fans fear not. KISS are not completely vanquished in Ella’s rework. Be assured KISS legions, Ella’s radical take still celebrates and worships, rock ‘n roll’s “Gods Of Thunder”.

ELLA FENCE: Singer songwriter, virtuoso musician, sonic adventurer.
Ella’s music is heralded by many, including being nominated for Australian Women In Music’s “Best Development Artist” 2019, accumulating 8 Gold Coast Music Award nominations (having won 2) and named as a finalist for the 2019 Carol Lloyd Award. The cherry on top is Ella has amassed over 4 million streams of her music on Spotify.

In 2022 Ella has new music rolling out internationally. The year will see Ella releasing a series of new singles, culminating in the arrival of a new album. Ella’s teamed up with local Australian and American producers to create an unfolding body of work that embraces a renewed interest in guitar-based Rock N Roll mashed with Avant-Garde…a demonic sonic blend.  Her new music is Ella being authentic, personalised and avoiding the musical tweet sized nonsense, that passes for today’s pop sound. Her sound is literate and sensory, unapologetically demanding, her vocals passionately soaring, her guitar playing a piercing Shark Alarm assault on the mind, body and soul.

Ella Fence breathes life into sonic art that transcends trivialities and the mind numbingly banal. Ella’s bad arse rock aesthetic is a mean “1000 Yard” stare, with guitar swung low.
Ella tours relentlessly. In the time-honoured tradition of classic Australian rock bands like AC/DC, she is not work shy. Ella performs throughout the country winning hearts and minds of appreciative audiences. She also does major supports in addition to her own wild and furious shows.

Ella’s been name checked stylistically with the likes of Saint Vincent and PJ Harvey. High praise indeed.  Her music disturbs the comfortable and comforts the disturbed.