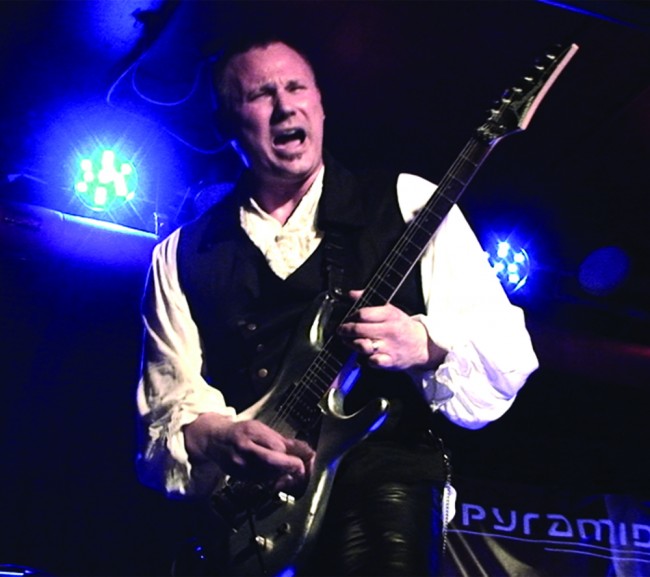 Hamilton, ON based PYRAMIDS ON MARS guitarist Kevin Estrella has teamed up with Neck Illusions for his custom Double Helix DNAguitar neck design, which can be viewed at the following pic below and at this link: http://www.neckillusions.com/products/double-helix-alien-dna?variant=6458861891. 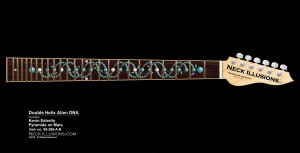 “The idea for the Double Helix Alien DNA design came to me in a dream.  My dream custom guitar is being handed to me by these Greys (aliens). The neck design is what captured my attention.  It is based on a Double Helix Crop Circle formation from 1996 in Wilts, UK. Images here.

“I am an ‘Experiencer’.   By this I mean that Aliens have been in direct contact with me.  I am now in close communication with world respected UFO researcher Grant Cameron.  He is helping me understand the UFO phenomenon on a deeper level,  and why these beings are having direct relations with me.  In his research, Grant has discovered that extraterrestrials are in communion with many musicians.  Additionally, important information is being downloaded to people through dreams.

I don’t know exactly what the ‘Double Helix” symbolizes, but I know I had to make it reality.  So I came to Neck Illusions with the concept.  They said absolutely they could create it and they did an amazing job. I am very happy to be part of this and to share the design with the world.”

These graphic decals are designed to fit standard electric and acoustic steel string guitars up to 24 frets (6 strings) from 24″ to 25.625″ scale scale lengths. Nut widths starting from 1.55″ (39mm) and wider.

In additional news, POM is offering fans a FREE download of the track ‘Battle For Rome’ from the upcoming ten track thriller ‘Echo Cosmic’ due out on September 8th to follow 2013’s full length self-titled debut. The album is inspired by Estrella’s fascination of UFO’s including his own encounter, plus compositions that have come to him in dreams and allow him to offer an aural palette of intense, emotional, 3-dimensional, heavy and melodic progressive rock/ metal that includes a range of influences from Baroque classical guitar, classical composers J.S Bach and Antonio Vivaldi along with today’s guitar virtuosos Yngwie Malmsteen and Joe Satriani.

To hear what’s to come from the release, head on over to PureGraunAudio.com at the following link and get your free download

Watch Estrella’s two guitar playthroughs have been released in support of the album.