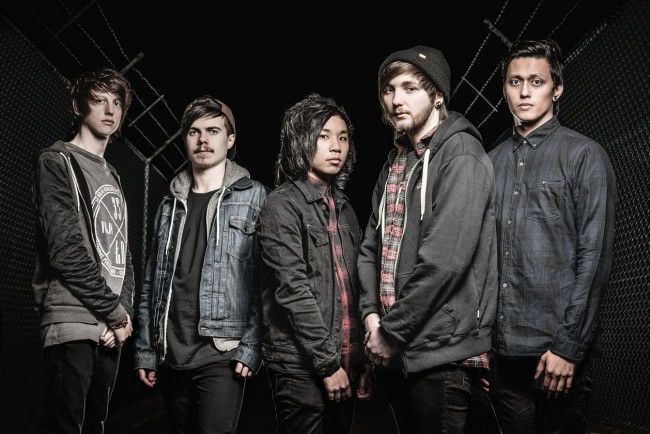 Spawned from the notoriously haunted city of York, Amongst Thieves bring their driving, intense and colossal sound to the winding streets of this ancient landscape. Composed of Josh Nash (Vocals), Alex Morgan (Guitar),
Ricky Kwong (Guitar), Jason Bentley (Bass) and Andy Ackroyd (Drums), Amongst Thieves slowly gathered their band members until they all clicked into place to create their own concoction of modern melodic and dynamic music akin to the likes of fellow home-towners ‘Asking Alexandria’, ‘Young Guns’, and Falling In Reverse.

Amongst Thieves have sowed their touring seeds in major cities across the UK, as well as co-headlining a tour with Omaha in Leicester, and playing with such established bands as The Colour Morale, The Word Alive, and Like
Moths to Flames. A successful 2014 brought the release of their debut EP “Revise. Reform.” which helped garner them a place in the line-up for Slam Dunk Festival as well as media coverage from Rocksound Magazine.

The industrious five-some now present a new video single entitled “101”, taken from their brand new EP “March For The Sun”. The EP has already gathered steam, with its first single, “Stay Close” (which features Garret
Rapp from The Color Morale), enjoying an exclusive premier on You Tube’s BryanStars’ Channel. The new single alludes to the band’s all over talent to deliver intense and hooky vengeful anthems, epic grandeur, and crafty
atmospheric moments that work to orchestrate rich and robust soundscapes in which to house Josh Nash’s astonishingly versatile vocal range. The guys are ready to hit the road good and heavy in support of their new EP, so be sure to catch them before they take flight.