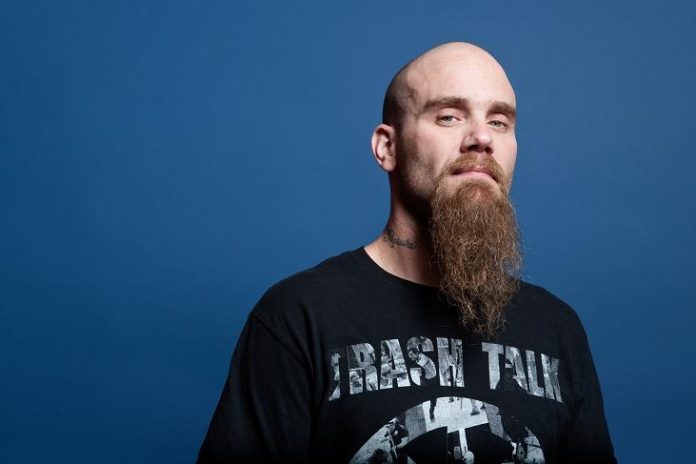 Nick Oliveri embark on summer acoustic tour across Europe in support of his new album Leave Me Alone, dates and festival appearances announced.

Nick Oliveri is one of the most dexterous and versatile journeyman musicians in the underground rock scene. His work with such bands as Kyuss, Queens Of The Stone Age and Mondo Generator has made him an iconic figure in the heavy music scene while his persona as long time Dwarves bassist Rex Everything and current bass playing duties with newly reformed hardcore act Bl‟ast have anchored him as a force to be reckoned with in the punk/hardcore realm.

His songwriting has appeared in landmark albums such as Wretch and Blues For The Red Sun (Kyuss) and Rated R and Songs For The Deaf (Queens Of The Stone Age). His body of work and catalog is vast and respectable with contributions to such artists as Turbonegro, Eagles Of Death Metal, Mark Lanegan Band, Winnebago Deal, Rollins Band, Masters of Reality and the legendary Desert Sessions recordings.

From July till mid August, Nick will be travelling across the Old World on a special acoustic tour in support of his latest release entitled Leave Me Alone that was recorded by his new project and debut solo effort (he literally played every instrument on the album, minus some guest appearances) called Nick Oliveri’s Uncontrollable. The tour kicks off in Erfurt (Germany) at the long running Stoned From The Underground festival alongside the likes of Electric Wizard, his old friend John Garcia, Radio Moscow and Danava and concludes August 16th at Leperfest (Belgium) where he‟ll share the stage with hardcore icons Sick Of It All, doom pioneers Pentagram, and cult-like Brujeria. He‟s coined the name of his acoustic tours as “Death Acoustic” tours and they‟ve always been an intimate experience with him and his fans, where he „s known to interact with the audience directly in the middle and between songs throughout the his sets, take requests and invite the whole audiences to get involved with the set, rowdy or not!

A quote from Nick himself on why the “Death Acoustic” name, “there’s Death Metal and Death Punk, so why not Death Acoustic?”

with the other European dates here: