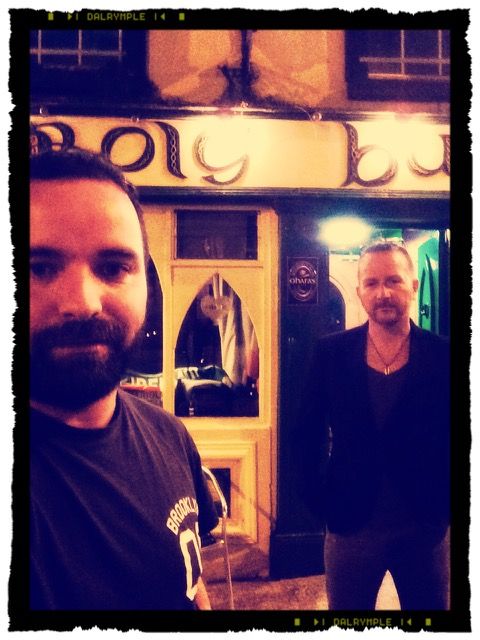 The producer of Warrant’s “Cherry Pie” record is twiddles the knobs here. What else do you need to know?

Cork’s Raising Jupiter have just released their new e.p. “Chrome” came out this week and Give Me the News is the first single from it – it’s doing well on the radio right now.

What really got the attention around here was that Beau Hill produced it. Amongst the stellar acts that Hill has worked with are Alice Cooper/Europe/Ratt/Kix/Warrant – for whom he produced the seminal (deal with it, it was!)  “Cherry Pie.”

In the past year since the May 2014 release of the Independent debut album “A Better Balance”, Dave Aitken (vocals and guitar) has been grafting away live, playing his brand of rock music travelling the highways and byways of his adopted home of Ireland with his band Raising Jupiter.

In March 2015 Raising Jupiter dipped their toes across the water and played their first UK show at the legendary Camden Underworld which was well worth the 16 hour round tripfrom Cork squeezed into a VW Golf, equipment and all!

With in excess of 42,000 Fans “following” the bands exploits through their various Social Media portals and after two single releases – Riding on a Wave ( August 2014 ) and Tight Rope (February 2015, both on heavy rotation in the U.S. on Network365 among others the plan was to release a third single from the album.

Raising Jupiter singles have been getting some series air play in the U.S. As fate would have it Tight Rope was heard on a Fort Worth Rock Station by none other than Legendary Rock Producer Beau Hill (50 million plus record sales !) who so impressed by what he heard, did a bit of research and got in contact with Dave offering some great advice and the idea of working together!

The result of this amazing bit of luck, is the stunning Chrome EP set for release on September 28th featuring two new songs, Give me the News, No – plus a remix of These are the Things.

Dave says “The song Give me the News was written around the time of both my parents taking ill and ending up being hospitalised within two days of each other. Got me kind of thinking about the ageing process and how you cope with it, thankfully they are both okay now!”

“RAISING JUPITER caught my attention with their excellent material, an unusual focus on arrangement details, and progressive melodic hooks…sounds like the recipe for a hit to me..” Beau Hill

Joining the Raising Jupiter ranks is Antoin O Brien to lend a hand on guitar for this next exciting phase which will see the boys mix up acoustic and full blown electric shows for the rest of the year.

A follow up to Chrome is already in the works.