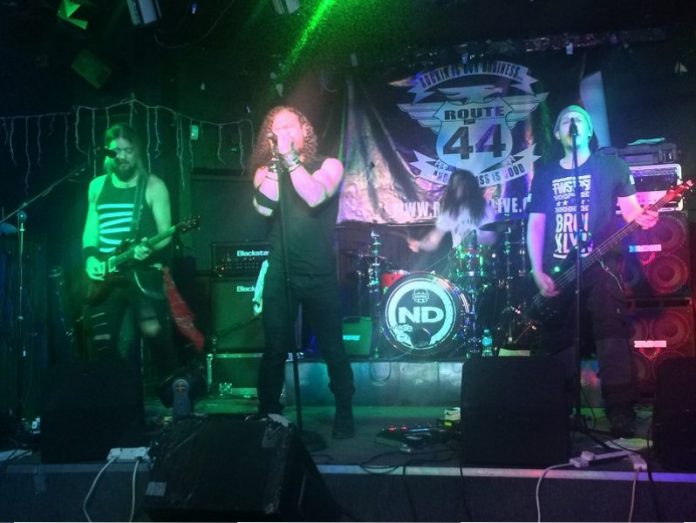 Once they dreamed of takin’ over. Now they just want to be your favourite band on the new scene

On the face of it Billy Bragg has not got a lot to do with a rock n roll gig in the Birmingham suburbs. But then, the Bard Of Barking is pretty relevant to most things.

It was he, after all – admittedly while paraphrasing Ian Hunter – who observed that it was a mighty long way down rock n roll from Top Of The Pops to drawing the dole.

Arguably, now Heaven’s Basement are finally no more, UK rock’s greatest triers. New Device have some stories to tell and war wounds to show. From being the first band to release an album on the short-lived label Classic Rock magazine started (MV can still remember buying the thing) to supporting Bon Jovi at the O2 Arena, they’ve done it all.

For ten years or so they’ve been at it, and watching as they start tonight with what is, to all intents and purposes their anthem “Takin’ Over” its hard to shake the feeling that they deserve so much better.

New Device, tonight with Darren filling in on bass, would perhaps have every reason to be bitter given that vastly inferior bands with similar sounds – let’s just say Shinedown shall we? – sell records by the bucketload, but there’s no hint of that here.

Instead they just crack on with an hour that wants to be nothing else than hard rock, with one eye on the Sunset Strip, but with its roots in some good old British grit.

“On Your Knees” one of the stand out cuts from their second record, is superb, as is the near power ballad, “Wreckage Of Me” which gives guitarist Matt Mallery the chance to show his prodigious skills. Elsewhere, “Devils On The Run” showcases a slightly darker side, but it’s the brilliant “Hollywood Radio” that assures everyone that ND very much belong on the top table.

As Leigh points out himself, this isn’t rocket science, and part of being in a band is to “stick it to the man”, which “Feel The Wrath” does admirably.

Things end with “Hope Is Not Enough” which stays just the right side of sleazy, and the enormous chorus and early Motley Crue style riffing of “On Fire” and again you are left shaking your head at what kind of break New Device need. Alter Bridge fill arenas with songs that aren’t this good and The Kills supported Guns N Roses when palpably not up to the task. All the while, right here on these shores, we have a band who were and are.

Still New Device know this and are probably bored of wondering why. Whether the takeover ever happens is open to question, but it damn well should if there was any justice. And, remember, it’s also a mighty long way down rock n roll from Liverpool Docks to the Hollywood Bowl, too.