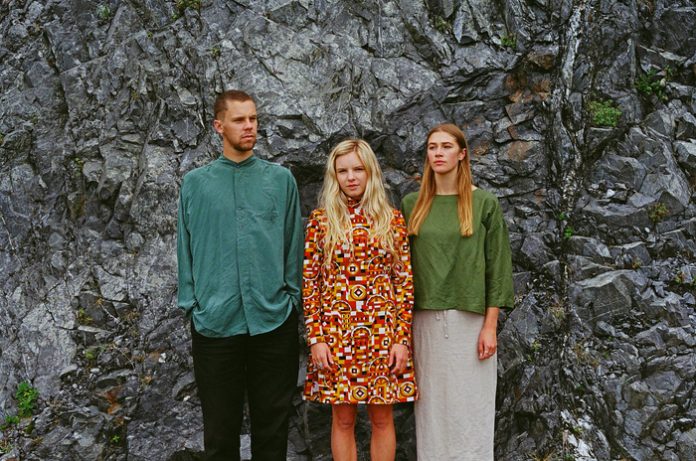 New Zealand band Mermaidens share the new video for their single “Satsuma”, taken from the forthcoming album Perfect Body, which is due out on 4 August via Flying Nun.
Mixing eye-popping colours and stunning visuals with an enjoyably retro aesthetic, the video features band members Gussie Larkinand Lily West in a fantasy world, where everything is just a little off-kilter – from the toxic greens to taxidermy on the walls and a real life rabbit. The song is dark and brooding and a little sinister, about the struggle of an aging relationship. Drawing inspiration from bands like Warpaint, Fugazi, Exploded View and Sleater-Kinney, Mermaidens’ sound offers a mesmerising dip into the realms of post-punk and psych.
The video was filmed and directed by Ezra Simons, with concept and styling by Gussie and art direction by Lily. It was shot in Gussie’s parent’s 70’s house in Wellington, NZ, which had been done up in the 80’s by a big nightclub owner. As she explains; “There’s lots of sleazy features like a grey leather ‘conversation pit’, black marble faux fireplace and of course a sauna and indoor pool. We were really lucky to have access to such a cinematic environment.” Her parents had amassed quite a collection of 60s space age furniture art and clothes, and Gussie also had spent years collecting vintage clothing, books, accessories and props, which were used to their full advantage in the video.
The video references the representation of women in the 1970s and the many archetypes of what women are expected to be. As Gussie says; “I love all the adverts and editorials in magazines from that time – some of which we feature in the video. There’s something grotesque about these women who are supposed to be sexy, domestic and intelligent at the same time. Their outfits are really great though!”
The song exemplifies the band’s sound, with warm harmonies and dreamy, hypnotic lyrics, entwined with dark and moody riff-based melodies. Although the song is about bad relationships, where it can be hard letting go of a life built together, it ends optimistically with instructions or a soothing mantra to talk about the good things and not get stuck in bad dreams. The haunting video reflects this, as Lily explains; “As with our songwriting, we like to take people on a journey that they can’t necessarily predict. Haunting? Perhaps it’s the direct gaze or eerie domestic familiarity.”
Mermaidens burst onto the New Zealand scene with their widely acclaimed debut EP O in 2014 and went on to release their debut album Undergrowth in 2016. As a result, they were offered dozens of shows and international support slots, which led to them being picked up by Flying Nun Records, who release the band’s first international album, Perfect Body, on 4 August.
Perfect Body features many of the familiar characteristics of the Mermaidens’ sound, with twinkly, reverb-laden guitar lines, rich vocal harmonies and vibrant drums. They have expanded on these sounds, bringing in even more dynamic elements, building richer melodic layers and a wider range of guitar textures, as they explore different levels of dissonance. Each song bursts with energy and variety, with contrasting light and dark, and they’ve left space for mellow and brooding instrumentals underpinning a powerful vocal melody.
Mermaidens pride themselves on an engaging and polished live performance. Their impressive portfolio of support slots and sold out shows, attests to the charm and excellence of their live show. In just a few years Mermaidens have sold out major venues in New Zealand as well as supporting acts such as Death Cab For Cutie, Sleater Kinney and Mac Demarco.
As a band who have grown dramatically since their inception, both creatively and musically, Mermaidens are undoubtedly a band to watch very closely, and are set to make a similar impact on the global music scene as they have at home in New Zealand.
https://www.facebook.com/mermaidensband/
http://flyingnun.co.nz/