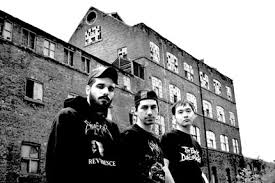 Yorkshire based melodic death metal band, Myth of a Life has inked a three-year record deal with giant Greek record label Sleaszy Rider Records (Motorhead, Def Leppard, Stryper, Whitesnake, Rotting Christ) in order to release our debut full-length album. The band say: “We would like to thank everyone who has helped and supported us to make this dream come true! Thank you so much guys! Stay metal! \m/”

The record label are equally excited in their official announcement:”International death metallers Myth of a Life signed a deal with Sleaszy Rider and we will release their debut album in late 2015. The band is based in Sheffield, UK and includes Greek singer Phil‘Core’, Japanese guitarist Taka and Italian drummer Dam (ex-Golem) and recently welcomed 2 new members, both British: Charlie (bass) and Dave (guitar).”

“All of us are very happy with our decision to sign with Sleaszy Rider Records. We feel that their professionalism, ethics and above all their love and passion for heavy metal music will help us take this next big step in our career. We look forward to get into the studio and record our full-length album. It is going to be killer!”