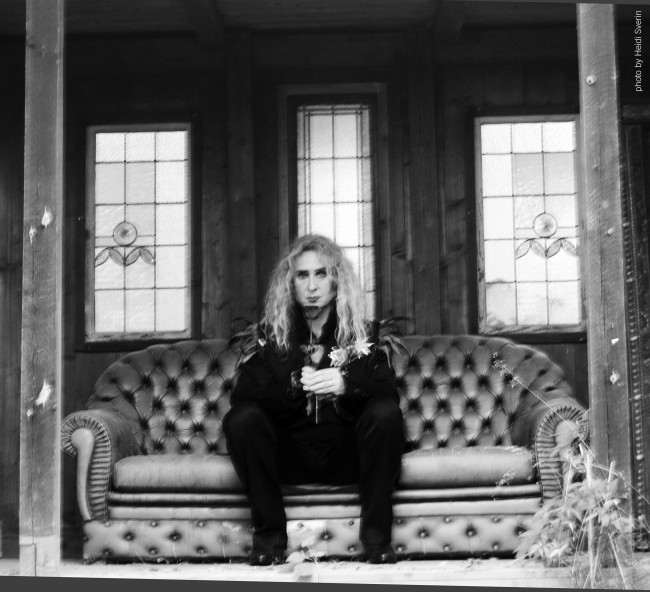 Flamboyant frontman stops by to tell MV all about his latest

Nad Sylvan is about to release a momentous album. Not only is ‘Courting The Widow’ his first solo record since 2003’s ‘Sylvanite’, but it comes at a propitious time in his career.

“I’ve just become a fully professional musician. I took the plunge a couple of months ago, and gave up the day job I’ve had for 16 years. It was a huge step to take, but one I felt will be justified by what I’ve done on this album.”

The highly rated Swedish vocalist has made the move at a time when his stock and reputation have never been higher. Thanks to his touring collaboration with Steve Hackett, Sylvan has become acknowledged as one of the finest singers on the prog scene.

“I do feel that I have picked up a lot of new fans, because of my association with Steve. They’ve been very welcoming and respectful of what I do.”

But now, with his confidence soaring on the back of proving a revelation fronting Steve Hackett’s band all over the world, Sylvan is taking control of his career, with his most ambitious and far reaching album to date.

“I suppose ‘Courting The Widow’ is conceptual, and has a storyline running through most of the songs. But it’s not actually about the widow in that title. It really concerns my stage persona, the Vampirate, and his journey on a ship, during which he does meet the widow in question.”

In fact, the title track of the album is also the oldest song on the album, dating back to 2009.

“I wrote it just before my mother died, and she loved the recording I did at the time. I offered it the Agents Of Mercy, the band I was with back then with Roine Stolt, but he wanted to alter it, and I felt this wasn’t the right thing to do. So, I decided to save it for a future solo project.

“The song is very dark, because it’s about a father who kills his son, in order to get his son’s woman. That’s typical of Vampirate character. He’s a sinister sweetheart, but definitely weird!”

One other track, ‘Killing Of The Calm’, dates back to four years ago.

“Again, it was originally intended to be recorded by Agents Of Mercy. But, like ‘Courting The Widow’, it wasn’t felt by Roine to be right for that band. So, I kept it back until the time was right to use it, which is now.”

The rest of the material on the album was written over the last two years. However, due to the demands of being in Hackett’s band, Sylvan had to wait until he had the time to devote to making this album in the way that he wanted.
“I had to ensure the conditions were right for me to make this new solo album. One of the things that definitely worked in my favour was that the whole perception of me as an artist has shifted in a very positive way.” The result is an album that has been fashioned and created without any compromise. Sylvan ensured this was the case by producing everything himself, albeit with expert assistance when it was required from The Flower Kings’ Jonas Reingold, who also plays bass on two tracks.

“Jonas was there to help out if I needed any guidance in the studio. But the production was down to me. I could do everything in the way that I wanted, which ensured the songs have turned out the way they needed to sound.”
So, what can people expect to hear on ‘Courting The Widow’?

“This is very much a symphonic album. However, there are funky touches in there as well. You will hear hints of classic Motown. Because I like to mix things up. As far as I’m concerned that’s what you should be doing if you want to be progressive, surprising people and doing the unexpected.

“The atmosphere throughout is very much 17th century, which is where I feel most comfortable. I have been a songwriter now for 42 years and feel like I’ve created my own style, which comes through on this album.”

One example of the way in which Sylvan is expanding the envelope comes through a track here titled ‘Ship Cat’.
“I recorded my own cat purring and meowing. And you’ll hear her doing this against the backdrop of a huge choir. This is a track which has my cat and the choir, plus a piano, harmonium and a string section.”

Although the majority of the songs on ‘Courting The Widow’ fit into the overall storyline, there are a handful that stand alone. One of these is ‘Echoes Of Ekwabet’.

“This was inspired by a statue I saw on the Fox River in Chicago when on tour in America with Steve Hackett.”
The statue was erected in 1988, in memory of the Potawatomi native American tribe, who settled in the region during the 17th century. The word ‘Ekwabet’ means ‘watching over’.

Apart from his distinctive vocals, Sylvan also plays most of the keyboards and the guitar parts on the album. However, there are also guest contributions from some stellar names. Steve Hackett, for instance, appears on three tracks. On one of these, ‘Long, Slow Crash Landing’, he and Sylvan get to perform a duet.

“What happened was that I recorded a guide guitar part to give Steve an idea about what I was after. Steve is such a better guitarist than I am, so I expected him to improve on what I did. However, while he did a great job, I decided to use a few of my parts alongside what Steve had recorded, to come up with a guitar duel. For me, it was a fantastic opportunity to be heard on guitar alongside someone as talented as Steve, and this guitar combination really adds a lot to the song.”

Roine Stolt also guests on guitar for one track, while Roger King (another member of Steve Hackett’s band) plays piano on two songs. Three more musicians associated with the Hackett band are also featured. Bassist Nick Beggs has a cameo role on five songs here, while Rob Townsend is present on saxophone and flute for three tracks. And Gary O’Toole plays drums on one. Former Jethro Tull man Doane Perry is the drummer on three other songs, and Nick D’Virgilio (who has worked with Spock’s Beard and Big Big Train) is behind the kit for three more numbers.
Norwegian violinist Annbjørg Lien and acoustic guitarist Lars Drugge, the latter a close friend of Sylvan, also made important contributions to the final album.

“I cherry picked all the musicians you hear, because of what they could bring to the final song arrangements. I needed to spread out musically, and they helped me to do it.”

‘Courting The Widow’ is an album of which Sylvan is very proud. It weighs in at just around 70 minutes, and the man himself believes it’s the perfect representation of where is he is right now, both creatively and artistically.

“I feel that I have delivered an album that’s true to myself and my values in life. It’s heartfelt, passionate, emotional and full of dramatic passages. I’m proud of what I’ve done here, artistically and musically.”