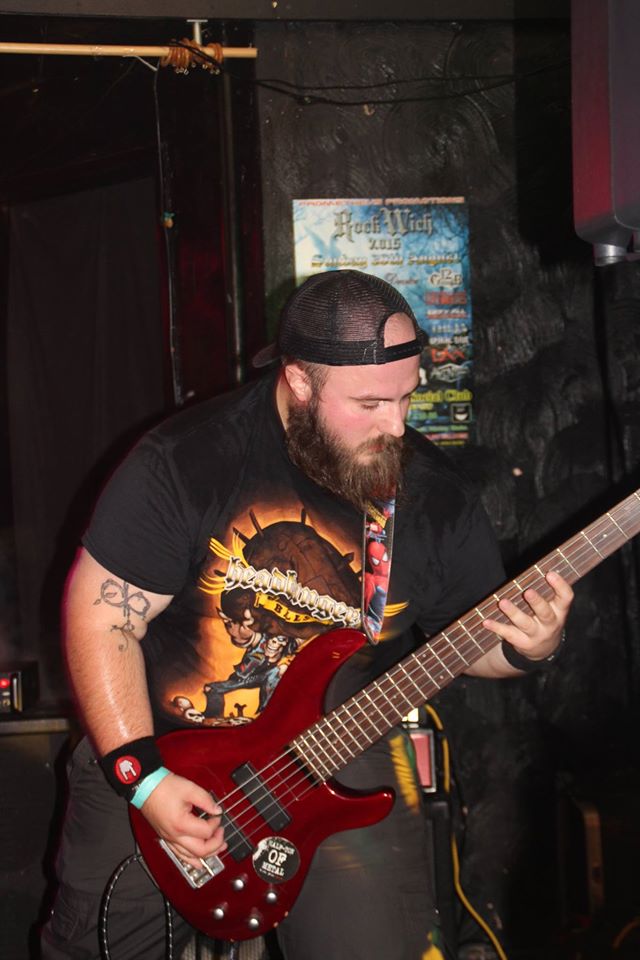 The Midlands’ own Left For Red step onto the Bloodstock stage tomorrow. Bass Man Dan tells us just what it means

The very words are a cliché. So much so that the phrase has lost all meaning.

Everything is a dream come true it seems in this hyperbolic world. But what if  what you are doing actually your dream, something you’ve worked for your whole life, what is it then? Is it really a dream come true.

Speaking to Dan Carter, amiable bass monkey with Left For Red, you have to surmise it actually is. Dan is one of the nicest blokes you could wish to meet, and he is one of those happy type of fellas, so a smile often isn’t too far away from his lips, but ask him the simple question: “You must be buzzing, mate?” And you get the type of look you might see on the face of a six year old on Christmas morning when they realise Santa has been.

The fantasy that’s about to become reality is quite simple. On Sunday, in the late afternoon, Carter and his band mates will step out on the Bloodstock New Blood Stage and thus fulfil their ambition.

“I first went to Bloodstock in 2010,” Dan recalls. “I knew it was where I had to play. Download, yeah it’s great and everything, Reading never interested me, but Bloodstock, that was the one for me  – and for us to be playing the festival is incredible.

We can perhaps forgive his reaction then, when Bloodstock’s very own Simon Hall rang to offer the slot. Did he jump around? Did he scream? Not quite. He swore. A lot. “I was going, ‘Fuck! ‘Fuck!” I couldn’t stop cursing!” He laughs.

And yet, the slot is more than deserved, LFR released their debut record earlier this year and “All Things Known And Buried” has gone down a storm. The band have played gigs all over the country and honed their craft. Indeed, now he’s calmed down – a bit – Carter sees the opportunity that the slot presents. “We just want to play more and more gigs in other parts of the country, but that’s the future, let’s just get the weekend out of the way and enjoy it!”

LFR are one of a clutch of Midlands bands on the bill, and Dan thinks that is fair reward for the quality of scene in the area: “we are blessed with so many great bands right now,“ he offers. “It’s brilliant that the place that gave metal to the world is still here and still producing so many great acts.”

Away from the local lads, Dan is absolutely certain who he’s most looking forward to. “It’s a killer bill, but it’s got to be Trepalium for me. I’ve told the boys, if they clash with us, LFR are playing without a bass player!”

They don’t, and he’s grinning when he says it. Not even Wild Horses would keep Dan away from this date with his destiny, you suspect.  It is a dream come true, after all.