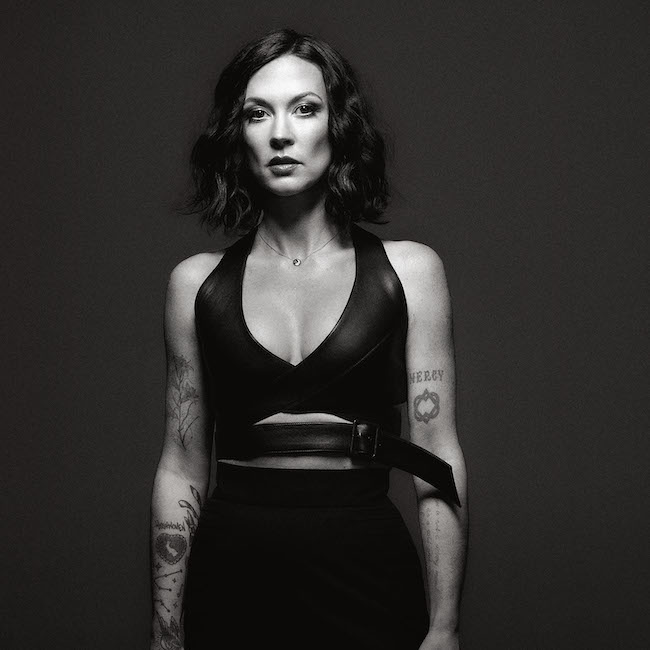 GRAMMY Award-winning singer/songwriter and virtuoso violinist Amanda Shires has shared her haunting new single, ‘Hawk For The Dove’. The evocative music video for the track was also released today.  ‘Hawk For The Dove’ is the first new single to be unveiled from her extraordinary forthcoming album ‘Take It Like a Man’, set for release on 29 July on ATO Records.  Featuring Shires’ delicate vocals and impassioned fiddle, ‘Hawk For The Dove’ immediately draws the listener in, and boldly encapsulates her rebirth both creatively and artistically. Amanda demurely sings, “I’m well aware of what the night’s made of, and I’m coming for you like a hawk for the dove. You can call it serious trouble, cuz that’s what I want”. Displaying a renewed confidence in her musicality, Shires co-wrote ‘Hawk For The Dove’ with producer Lawrence Rothman, who also plays keyboards on the track. Brittney Spencer lends background vocals, and Jason Isbell is featured on guitars. Amanda comments, “This is the song where Jason finally had enough of the buzz in the studio and switched to a Gretsch. That was the moment he realized why Chet Atkins (who recorded in this studio) loved Gretsch guitars”.

STREAM’ HAWK FOR THE DOVE’ HERE

Filmed on location in Santa Monica, California, the music video for ‘Hawk For the Dove’, juxtaposes scenes of birds flying overhead in cinematic skies, with scenes of Shires suggestively romping in a hotel room. The video culminates with Amanda perched on a rooftop, decked out in full hawk mode. The captivating clip was directed and edited by Amanda and Deren Ney, with director of photography Michael Schmelling. Amanda explains, “I want people to know that it’s okay to be a 40-year-old woman and be more than just a character in somebody else’s life. The song and the visual representation of the song deal with the emotions that turn prey into predator”.

The new album ‘Take It Like A Man’ is a fearless confessional featuring 10 emotionally raw tracks, produced by the talented gender-fluid singer-songwriter and producer, Lawrence Rothman, (Angel Olsen, Girl in Red, Courtney Love). Upon hearing Amanda for the first time Lawrence said, “I was just mesmerized. I thought she was the new Dolly Parton; Dolly for a new generation.” With the album, Shires hit the reset button and made a record so unlike anything she’s ever recorded that it feels like her debut album instead of her seventh. Written and recorded during lockdown, the new record features Isbell on guitar on several tracks and guest vocals from Maren Morris, Natalie Hemby and Brittney Spencer. ‘Take It Like A Man’ is a song cycle of ruthlessly candid tunes written as a document by Amanda about her life as a woman, a wife (to husband Jason Isbell) and a mother during a tumultuous time.  Shires’ lauded 2021 holiday album ‘For Christmas’ received raves from the likes of Rolling Stone, People Magazine, Associated Press and many more. Long admired by fans and critics alike, Paste called Amanda Shires “a meticulous lyricist with an unconventional perspective,” while Stereogum said, “Shires has the precision of a great country singer… she puts herself right into the desperate circumstances of her own characters” and “her songs work as finely wrought short stories,” while NPR Music declared, “hearing Shires… is invigorating.”

Since getting her start playing fiddle with the legendary Texas Playboys at the young age of 15, Amanda has brought her nuanced songwriting and boundless originality to her critically acclaimed solo albums, collaborated with the likes of John Prine and Justin Townes Earle and earned the 2017 Emerging Artist of the Year prize from the Americana Music Association (AMA). Amanda is a member of Jason Isbell’s 400 Unit and founded The Highwomen – a supergroup she also performs in alongside Maren Morris, Natalie Hemby, and Brandi Carlile.  The band hit #1 on Billboard’s Top Country Albums chart with their self-titled 2019 debut.