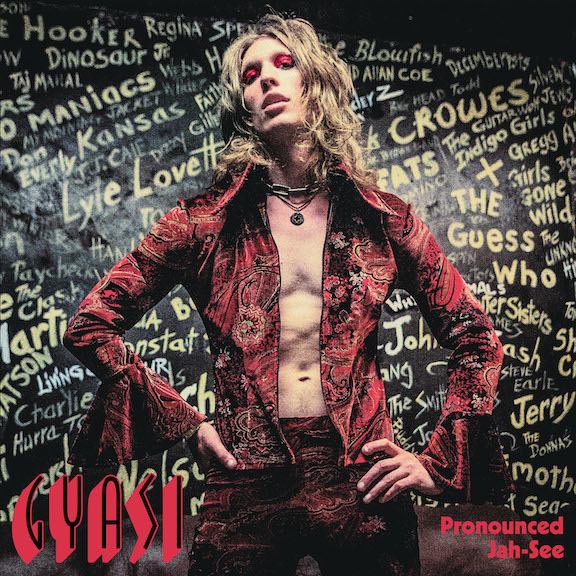 Gyasi Heus grew up in rural West Virginia and was raised by bohemian parents but now resides in Nashville and records under the name Gyasi (pronounced Jah-See).

His debut album `Pronounced Jah-See` is released this month and is all about the joy of rebellion. Gyasi is an accomplished singer/guitarist/songwriter who has been championed by rock luminaries as diverse as radio DJ Rodney Bingenheimer and Henry Rollins.

The album explodes into life with `Burn It Down` and it`s a wonderful mix match of seventies retro and psychedelia. We have some blistering guitar riffs throughout and some dreamy vocals sprinkled atop. There was a Glitter band beat to `Tongue Tide` with its shaken tambourine and pounding drumbeat at its heart and harmonica snatches interspersed throughout. The vocals are almost gently added nigh on remotely into the mix.

`Androgyne` begins with a question “are you a transvestite?” before a strummed guitar leads us along this captivating piece. There`s a kind of organ sound underpinning the track and we also enjoy some intricate guitar chords that sound like they`re from a steel or resonator guitar. A delightfully mesmerising submission. We are counted into `Black Sheep` with its sort of languid guitar riff s and brass tinges. This was a number that really reminded me of early English glam art rockers Suede.

`All Messed Up` is a bluesy quite retro affirmation of what being in love can do to you. A number to just sit back and enjoy as we have some scintillating riffs and rolling drumbeats swirling around. I was transported back to my really early teenage years at the beginning of the seventies with `Little Tramp`. It could have easily sat on my favourite album of all time David Bowie`s `Hunky Dory` and reminded me a little of the thin white Duke`s `Andy Warhol` number.

`Feed Your Face` is an enchanting uplifting dreamy composition that will have you happily drifting off as it flows over and around you. I thought `Walk On` had a real Marc Bolan vibe to it, not only musically but in the quite strange lyrical content shared.

`She Don`t Care` is an enthralling ballad with a period piano texture and some cracking fuzzy riffs and a stunning guitar solo right at the end. To me `Fast Love` could have been `Hot Love` from T.Rex. It has that feel of `Children of the Revolution` or `The Motivator` with it`s scorching guitar riffs and wistful vocal delivery.

`Kiss Kiss` is a fairly fast paced bluesy outing with a driving drumbeat rhythm, tinkling piano keys, saxophone snatches, occasional vocal harmonies, and guitar riffs aplenty. A real rock out. Things get a little spiritual and trippy on `Godhead` which really sparkles. A Godhead relates to divine nature or essence, the origin of all things that is beyond God. This track does have that heavenly or celestial feeling about it.

There`s a bonus track on the cd with `Swordfight` a quite thrashy enticing rock out of sorts.

I have to admit there was so much to enjoy on `Pronounced Jah-See`. Don’t let this artist`s fondness of outlandish costumes and platform shoes and love of all things from the golden age of UK glam cloud your judgement.

This singer/guitarist/songwriter has the image, looks, licks, and moves but also the talent. This release brings retro rock ‘n’ roll into the 21st Century. As Marc Bolan once sang “I danced right out of the womb”, i`d say GYASI did to.

Beg. borrow or steal this album, GYASI is an Electric Warrior on the rise