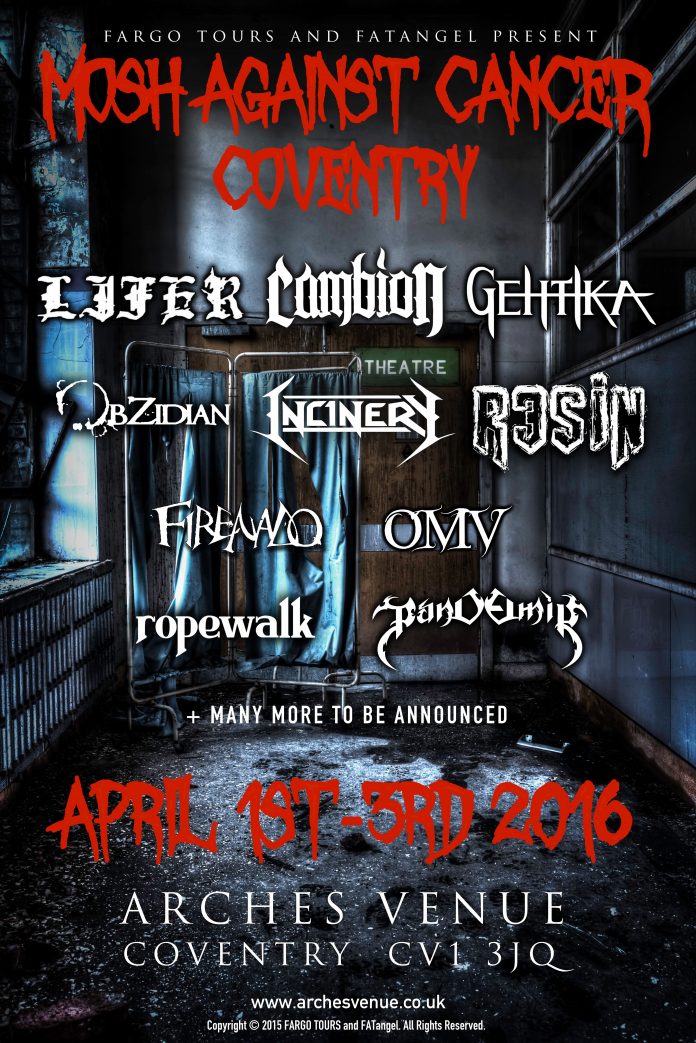 Lifer, Obzidian, Pandemik & Firenado are the next four bands to be announced as playing the Coventry leg of Mosh Against Cancer

FATangel and Fargo Events are proud to announce four more bands to be added to the line up  for the inaugural MOSH AGAINST CANCER COVENTRY. They will be joining Cambion, Incinery, Gehtika, Resin, Ropewalk & OMV who have already been announced.

Coming to The Arches Venue Coventry April 1st – 3rd 2016 this three day extravaganza will bring more than twenty eight rock and metal acts from all over the UK to Coventry to perform in aid of Teenage Cancer Trust.

Lots more exciting names in rock and metal are yet to be announced including headline acts, two of whom will be announced on September 29th, the day after Mosh Against Cancer makes it’s debut in Derby under the ‘Padfest’ flag.

HEAVIER THAN MOST and catchier than a truck full of bare breasted STD ridden nuns. LIFER exist because they do and dare you to fill your ears with downed tuned metalurgy – your ears have earned this.

No strangers to big events, LIFER have played Hevyfest, Hammerfest and Bloodstock Open Air, with the imminent release their second album which features recently released single ‘Year Of The Hog’ https://soundcloud.com/lifer-scriv/year-of-the-hog

Expect LIFER to take everything to the next level in 2016.

OBZIDIAN, groove death metallers from Stafford (UK), released their 3rd album “Concrete Psychosis” on Rocksector Records, 6th October 2014, the follow-up to the highly acclaimed 2012 album “Damned Eternal”. OBZIDIAN goes back to the founder’s high school days when Baz (guitars), Paul (drums) and Jeffsy (bass) formed the basis of the band in 2001. Having added a couple of further members in the formative years, by early 2005, the line-up was stripped back to just one guitarist, Baz, whilst Matty J was added as frontman and vocalist, and the band’s current groove-laden sound was conceived.

Bringing you their own trade-mark genre “Regressive Metal,” of groove blended 90s death thrash, this is PANDEMIK.
This 5-piece Liverpool band, except for the half that is Welsh, PANDEMIK consists of front man Marc M, whose charismatic enthusiasm is enjoyed on and off stage whether through his growling vocals, or to his witty jokes inbetween songs. Mike H on drums smash it, grabs it and does one at every gig, he gets the job done with ease. Chris H on lead guitar is not just the man to look to on stage as the composed one, he also has a wah pedal. Lee J on rhythm guitar adds to the sound on stage (because 5 is more than 4) and finally Alan N on bass, adds to the comedy as he does to the set (well, hes bald) providing a good indication on what type of night you will have with these lads.

Combining elements of old school and modern thrash and groove metal with a hint of death metal, FIRENADO thrive on an aggressive sound and an equally balls to the wall live show. Blending melodic harmonies with a fast paced groove to sludgy breakdowns that will tear you a new one. The visceral riffage is accompanied by harsh old school thrash vocals and even harsher growls provided by Adam and Matt. FIRENADO are blazing a trail of destruction through the UK music scene and are here to burn it down!

With many more bands yet to be announced along with other features to the show, MOSH AGAINST CANCER COVENTRY looks to be one of the must attend events of next year.