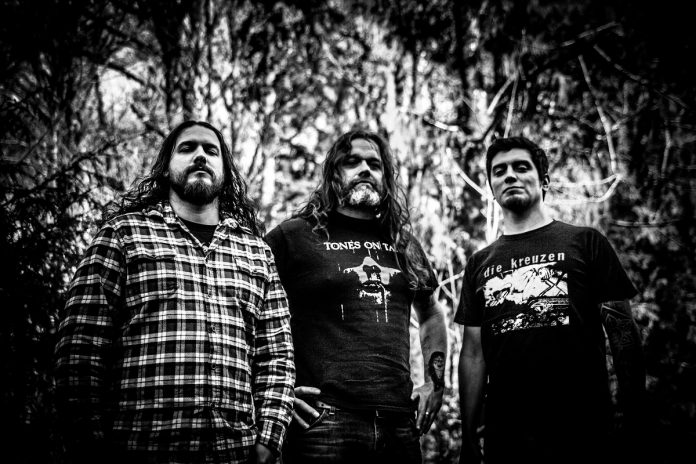 Port Orchard, Washington’s MOS GENERATOR spent most of 2016 and 2017 on tour supporting their ‘Abyssinia‘ album. During a special night on the tail end of the tour, an entire set was recorded at Rebellion, in Manchester England on October 4th, 2017.

Mixed and mastered at his HeavyHead Recording Company in January 2019, Tony Reed, guitarist and vocalist for MOS GENERATOR, tells the tale:

“Many months after the European leg of the Abyssinia Tour was over, I was cleaning out my guitar case and found a flash drive that I had forgotten about. Upon inspection, I realized it was a complete multi-tracked live performance, date and city unknown. After listening to some of the banter in between songs, I figured out that it was from Manchester, England. I distinctly remembered that show, because we played a Mahavishnu Orchestra/King Crimson medley that night and I think we only ever played it live three or four times.

That wasn’t the only interesting addition to the set list that night – “Easy Evil” was also a rarity in the set, along with the opener “Strangest Times.” “Shadowlands” (title track of the future 2018 album) was performed at the show as well, and we rarely played new songs before they were recorded and released. All in all, it was a blazing set that focused mainly on songs from ‘Abyssinia’, but also included a well-rounded collection of songs from our previous albums.

The album title is a play on “Day of the Lords”, a song by the band Joy Division from Manchester, England. The cover of this official “bootleg” release is a tribute to many of the unofficial records I have from the 70s on infamous labels like Trademark of Quality, The Amazing Kornyfone Record Label (TAKRL), and Wizardo. In the early days of bootleg vinyl, they just glued a photo copied piece of paper on a white jacket and called it good. The inspiration for this layout came from a David Bowie bootleg called “His Master’s Voice”, one of the first bootlegs I ever owned.

Most of the time when I (rarely) listen back to live recordings of the band, I find myself remembering our performance as being better in my head than it actually was. That is not the case with this show. The set list, energy, performance and the right amount of risk-taking make this a show we are excited is getting released.” – TR

‘Night Of The Lords’ Tracklist:

Side One:
Strangest Times
Lonely One Kenobi
Shadowlands
Easy Evil
There’s No Return From Nowhere
Dance of Maya / Red

The single “Breaker,“ track one on Side Two of ‘Night Of The Lords‘, is offered today as a free download on Bandcamp.
https://mosgenerator.bandcamp.com/track/breaker-live-manchester-uk-10-4-17

Tony Reed also gave some insight about the song:

“I chose Breaker for the teaser track because it’s a ripping version. It came about mid-way through the set and we were really warmed up and in tune with the vibe of the room. In the set it came after a Mahavishnu Orchestra / King Crimson medley that, in the handful of times we’ve played it live, left the audience dumbfounded and slightly confused. We thought we would follow up that prog-rock exploration with our best heavy boogie number. We don’t always include Breaker in the set, but I’m glad we did on this night.”

Mos Generator’s ‘Night Of The Lords‘ live album, the first release in the Devil’s Child Records ‘Bootleg Series’, was created in true bootleg fashion. Pure rock music captured in a live recording, issued in a limited run of 100 copies on black vinyl. Each record is hand-numbered with either a yellow or blue photo cover on primarily a hand-assembled package. A few test presses will also be available on release date. There are no pre-orders.

“Devil’s Child Records is elated to present the first record in our new ‘Bootleg Series’, Mos Generator, ‘Night of the Lords’. Bootleg records were created as a rebellious act of defiance all for the love of music. This series is all about our love of music, and pays a unique homage to the bootleg recordings from the 1970’s.

We are excited to be working with Mos Generator again for this release, with special thanks to Tony Reed in helping shape an idea into a reality for the Devil’s Child Bootleg Series.”

Mos Generator formed during the winter of 2000, in Port Orchard, Washington from the ashes of a ten year off and on collaboration between its original three members, all of whom were long time veterans of road and studio. The need to strip down to the basics of hard rock was apparent from the start and continues to be the foundation for all the band’s recent material.

The discography of Mos Generator includes seven studio albums, a retrospective album, a live album and a plethora of split 7″ and 12″ singles on such labels as Listenable, Roadburn, Small Stone, Ripple, Nasoni, Lay Bare, Hevi Sike, H42, Devil’s Child, and Heavy Psych Sounds. Touring has been just as important to the profile of the band as making records has. Over the years, Mos Generator has shared the stage with many great heavy rock bands, including extensive tours with Saint Vitus, Fu Manchu, Elder, Spirit Caravan, and Atomic Bitchwax, introducing a whole new fan base to the Mos Generator sound. Let’s Rock ‘N Roll!!