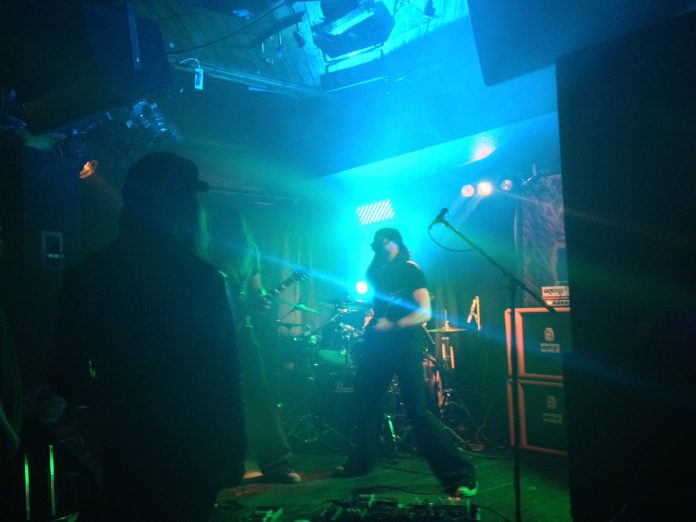 When is stoner not stoner? And other pointless questions. Everything gets answered at Scruffy’s tonight.

Coventry’s genre hopping Resurrection Men released an album (self-deprecatingly entitled “Resurrection Men Must Die”) late last year. So superb and different was this thing that MVM gave up trying to explain it. The best we could do was some half baked “Faith No More gone stoner” analogy. Much better, we thought, to listen the cd than describe it.

Happily live onstage they are no different. Thick riffs mix with some other stuff that you just don’t see coming. “She’s The Device” is one such moment, coming in not unlike a testosterone fuelled Therapy? And after that it’s a full on late 1960s freak out. Maybe it’s the different backgrounds the five have, who knows? Because while RM have the look of a band who all like different things, they have the sound of one who chucks everything into the pot and comes out with a Michelin Star menu.

Even a stand in guitarist can’t diminish the barmy brilliance of “Make It Home,” which still sounds like Faith No More at their most out there and “This Guy Played Milan” is just riffs aplenty fun. They end their set drench in a wall of noise and the thought is confirmed. Resurrection Men are a gem. Quirky, yes, but a gem all the same.

“We are gonna need loads of smoke,” smiles Morass Of Molasses main man Bones from behind facial hair that would make Billy Gibbons jealous as he stands ready to hit the first notes, “just cuz….”

They are already onto a winner. You see there are many ways to win MVM’s affections quickly. Beards are good and Status Quo T-shirts are another. Reading’s Morass Of Molasses meet both these requirements in the shape of Bones and guitarist Phil, but the trio also tick a rather more important . Being absolutely fantastic. A quick listen to their upcoming four tracker “So Flows Our Fate” tells you that.

It is one of that quartet, “Fear To Tread” kicks – or accurately pounds – us off, a magnificent track, it is swampy doom right to its core, but it’s so much more fun than that.

MoM you see, are a band that revels in the unexpected. So there’s quiet bits, monumentally heavy bits and grooves you can swagger to are never far away.

“Bear River” a song American Indians being slaughtered (“we deal in cheery stuff” explains Bones), builds ominously to something approaching fuzzed up perfection, as drummer Chris grins from behind the kit like a man who lives for this stuff.

They stick to the anything can happen motif of their music in the patter too, so it shouldn’t come as any surprise that the wonderfully engaging singer/bassist asks a member of the audience if he likes to be asphyxiated during sex at one point- it’s that kind of evening.

“Maenads” – not on the EP which rather shows just how many brilliant tracks these boys are carrying around – crushes like Sabbath at their most oppressive before the end section thunders in. It is about naked witches, apparently and is like bliss and an aneurysm, which is good to know.

There’s not time for any thoughts about where the broomstick would go before “Rotten Teeth” – the lead track on “…Fate,” which sees the band live up to their name. It is sickly, thick and very, very sweet. It is also trippy and hypnotic, which is why Molasses are so damn good.

The twisting, turning and gloriously undulating”Ashtabula” is, like on the record, the best of all, turning into a huge jam before the end.

A 50 odd minutes that is genuinely thrilling is ended with “Serpentine” which is definitely not about cock we are told, but is about greed. It doesn’t really matter what it’s subject matter is, as with all MoM songs, it’s all to do with tone, authenticity and feeling.

The crowd may have been not been large, the fact that they were late additions as headliners and relatively new may account for that, but Morass Of Molasses are a band of clear ambition. They also don’t seem to understand what the words “boundaries” and “expectations” mean. They don’t work in the former and enjoy confounding the latter. Make no mistake about it, this is one of the most promising bands in the UK right now.